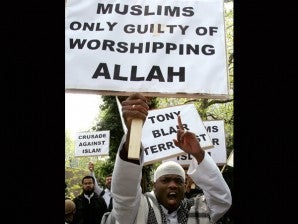 Michael Adebolajo, front, shouts slogans as Muslims march in London in a protest against the arrest of 6 people in anti-terror raids, in this Friday April 27, 2007 file photo. Adebolajo has been identified as one of the two men who attacked and killed a British soldier on a street in south London on Wednesday May 22 2013. AP

LONDON — Police, politicians and activists in Britain are warning of rising anti-Muslim sentiment following the slaughter of an off-duty British soldier in a London street, an apparent act of Islamic extremism that has horrified the nation.

Metropolitan Police investigating the killing of Lee Rigby, a 25-year-old soldier who was run over by attackers then butchered by knives, arrested three more men in the murder investigation Saturday. Stun guns were used on two of the three men, aged 24 and 28, police said.

The latest arrests came as an estimated 1,500 members of an extremist right-wing group called the English Defense League marched in the northern English city of Newcastle, chanting Rigby’s name. In the southern English city of Portsmouth, police arrested two men for a racially motivated assault as hundreds of demonstrators gathered near one mosque, while several more people were detained for alleged racist offenses elsewhere.

The two men suspected of killing the soldier, Michael Adebolajo, 28, and Michael Adebowale, 22, remained under armed guard in separate London hospitals after police shot them at the scene. Police have not officially named the suspects because they have not been charged, but British officials, speaking on condition of anonymity because they are not authorized to discuss the investigation, have confirmed their names to The Associated Press.

Wednesday’s murder in southeast London’s Woolwich area shocked the nation partly because the horrific scenes were recorded on witnesses’ cellphones, and a video picked up by British media showed one of the two suspects, his hands bloodied, making political statements and warning of further violence as the soldier lay on the ground behind him.

Counter-terrorism police also are questioning a friend of Adebolajo who was arrested Friday night immediately after he gave BBC Television an interview detailing why he thought Adebolajo may have become radicalized.

Metropolitan Police said the friend, identified by the BBC as 31-year-old Abu Nusaybah, was wanted himself on suspicion of “the commission, preparation or instigation of acts of terrorism.” The force declined to elaborate.

In his BBC interview, Nusaybah said he knew Adebolajo as a moderate Islam convert. He said he thought Adebolajo’s behavior changed after a trip to Kenya last year, and alleged that Britain’s MI5 domestic spy agency tried to recruit him upon his return six months ago.

Rigby’s killing — and Adebolajo’s apparent link to Islamic extremism — has stirred anti-Muslim backlashes across Britain. Police said they arrested three people on suspicion of posting racist tweets ahead of the English Defense League march, and further detained 24 others before and during the protest on suspicion of public drunkenness, vandalism and distributing racist literature. One group of marchers carried a sign that read “Taliban Hunting Club.”

About 350 counterdemonstrators who called themselves Newcastle Unites shouted abuse at the marchers, including “Nazi scum off our streets!” The region’s Northumbria Police said riot police prevented any direct clashes between the opposed groups.

Meanwhile, the far-right British National Party announced it would rally supporters next weekend on the spot where the young soldier was killed.

“Has the horror of Woolwich woken you up too? … Join the British resistance,” British National Party leader Nick Griffin said in a video address Saturday to supporters announcing his plans for a “Stand Up to Muslim Terror” rally at the scene of the crime, where thousands already have left floral bouquets paying tribute to the soldier.

A group that campaigns against extremism, Faith Matters, said it has received reports of around 150 anti-Muslim hate crimes across Britain since the soldier was killed Wednesday, more than 10 times the usual rate. Its director, Fiyaz Mughal, said he was particularly concerned by how geographically widespread the actions, including street fights and the vandalism of mosques, had become.

“Some of them are quite aggressive, very focused, very aggressive attacks … against institutions or places where Muslims congregate,” he said.

Questions abound over what could have led the two men to attack Rigby, a drummer and machine-gunner who had served in Afghanistan and was off-duty when he was walking near his barracks. Nusaybah’s interview with the BBC offered one possible narrative. He said Adebolajo became withdrawn after he allegedly suffered abuse by Kenyan security forces during interrogation in prison there.

“Although that change wasn’t necessarily one that became overt, aggressive or anything like that, he became … less talkative. He wasn’t his bubbly self,” Nusaybah told the BBC.

He said MI5 agents approached Adebolajo after he returned to Britain and initially asked him if he had met specific Muslim militants, then asked Adebolajo if he was willing to act as an informer.

“He was explicit in that he refused to work for them,” Nusaybah said.

The BBC said police arrested Nusaybah outside its studio immediately after the interview was recorded.

“This interviewee had important background information that sheds light on this horrific event,” the BBC said in a statement. “And when we asked him to appear and interviewed him, we were not aware he was wanted for questioning by the police.”

It was not immediately possible to verify the information provided by Nusaybah, who said he had known Adebolajo for about a decade. MI5 does not publicly discuss its efforts to recruit informers.

Nusaybah said Adebolajo converted to Islam around 2004. His account corroborates those provided by two Muslim hard-liners who said they also knew Adebolajo.

Anjem Choudary, a former leader of a banned British radical group called al-Muhajiroun, said Adebolajo was a Christian who converted to Islam around 2003. Choudary told the AP that Adebolajo participated in several of the group’s London demonstrations before Britain outlawed al-Muhajiroun in 2010.

Omar Bakri Muhammad, another former al-Muhajiroun leader and radical Muslim preacher, said Adebolajo is a Nigerian who was born and raised in Britain. He said Adebolajo attended his London lectures in the early 2000s, but added he had not stayed in touch with the suspect since then.

“I don’t know what Michael did since 2004 or 2005,” Bakri told the AP. “Two years ago he stopped attending our open lectures and lessons as well as our activities.”

The University of Greenwich confirmed Saturday that Adebolajo was a student there from 2003 to 2005 but dropped out.

Fewer details have emerged about Adebowale besides one reported brush with death as a teenager.

The Guardian newspaper, citing police and court records, reported Saturday that Adebowale was stabbed in 2008, when a man attacked him and two friends in a London apartment. One 18-year-old friend died and the attacker received a life sentence for murder, the newspaper said.

MI5 Director-General Andrew Parker is expected to deliver a preliminary report next week to Parliament’s Intelligence and Security Committee detailing what the agency knew about both suspects and whether the domestic spy agency could have done anything to stop the attack.

The directors of Britain’s foreign spy agency, MI6, and Britain’s eavesdropping agency, GCHQ, also are expected to give reports on what intelligence they had on the two men.

Police earlier this week detained three others in connection with the murder probe. Two women were released without charge, and a 29-year-old man has been bailed pending further questioning.