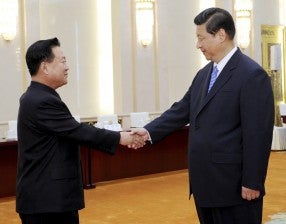 BEIJING — A top North Korean envoy has delivered a letter from leader Kim Jong Un to Chinese President Xi Jinping and told him Pyongyang would take steps to rejoin stalled nuclear disarmament talks, in an apparent victory for Beijing’s efforts to coax its unruly ally into lowering tensions.

The official China News Service said Choe delivered the handwritten letter from Kim to Xi at an afternoon meeting at the Great Hall of the People in central Beijing. It gave no details about the letter’s contents.

North Korea is willing to work with all sides to “appropriately resolve the relevant questions through the six-party talks and other forms,” Choe was quoted as saying by Chinese state broadcaster CCTV. He said Pyongyang was “willing to take active measures in this regard.”

In a report released early Saturday, North Korea’s official Korean Central News Agency quoted Choe as telling Xi that the alliance with China “cannot be exchanged for anything,” but didn’t make any reference to his remarks on the stalled talks or Pyongyang’s nuclear arms development.

Choe offered no details on how North Korea planned to resume the talks, according to CCTV. North Korea walked away from the six-party nuclear disarmament talks in 2009 over disagreements on how to verify steps the North was meant to take to end its nuclear programs. Foreign observers often claim that North Korea has a history of raising tensions in an attempt to push its adversaries to negotiations meant to win aid.

Since its third nuclear test, in February, North Korea has repeatedly said that any future diplomatic talks would have to recognize it as a nuclear power. That’s at odds with the basis of the six-party talks and puts Pyongyang at loggerheads with Washington, which says it won’t accept North Korea as an atomic power and demands that talks be based on past commitments by the North to abandon its nuclear programs.

Still, Choe’s remarks seem to indicate an easing of tensions between North Korea and its communist neighbor.

John Delury, a professor at Yonsei University in Seoul who specializes in China and North Korea, said the fact that Kim’s envoy “is being quoted as saying that North Korea is open to China’s suggestions already is a strong signal of kiss and make up.”

“This trip is moving things back to a regular strategic dialogue,” he said.

China has been under intense pressure from Washington to push North Korea into lowering tensions and resuming dialogue.

Xi reaffirmed longstanding ties between the communist neighbors, and urged all sides to “keep cool and exercise restraint.”

The six-party talks, which include the Koreas, the U.S., Japan, China and Russia, should aim to end North Korea’s nuclear programs and “maintain lasting peace and stability on the peninsula and in northeast Asia,” Xi was quoted as saying.

The meeting followed an unusual half-year gap in high-level contacts during which Pyongyang angered Beijing by conducting rocket launches, a nuclear test and other saber-rattling — spiking tensions with South Korea and the U.S.

Beijing considered the moves an affront to its interests in regional stability and showed its displeasure by joining with the U.S. to back U.N. sanctions and cut off dealings with North Korea’s Foreign Trade Bank.

North Korea also frustrated Beijing by refusing to agree to high-level meetings and incensed the Chinese public this month with the detention of a Chinese fishing crew.

“The relationship is rocky, so they will try to mend the relationship,” Cui Yingjiu, a retired professor of Korean at Peking University, said of North Korea. “Second, they also want to improve relations with the U.S. and need China to be their intermediary.”

North Korea has figured prominently in recent visits by Secretary of State John Kerry and other U.S. officials, and Choe’s visit to Beijing came ahead of a meeting in California early next month between Xi and President Barack Obama, as well as a planned trip to Beijing by South Korean President Park Geun-hye in late June.

China is North Korea’s last significant diplomatic ally and main source of trade and economic assistance. Ties between their insular communist governments have always been wrapped in secrecy and the contents of Kim’s letter to Xi may never be revealed.

China is believed to have agreed to Choe’s visit only after Pyongyang committed to returning to the process of negotiation, and required him to state that publicly twice before his meeting with Xi.

Pyongyang is thought to have a handful of nuclear bombs. It is unclear how far it has advanced in efforts to shrink a warhead down to fit on a missile, but many analysts believe that it hasn’t yet mastered that miniaturization technology for a missile capable of hitting the United States.

Earlier Friday, a top Chinese general told Choe that Beijing wanted a peaceful, denuclearized Korean Peninsula, in a reiteration of China’s established position that could also be seen as a rebuke to the North.

China’s official Xinhua News Agency quoted Fan Changlong as telling Choe that tensions surrounding the nuclear issue have “intensified strategic conflicts among involved parties and jeopardized the peace and stability of the peninsula.”

Xinhua quoted Choe as telling Fan that there is “no guarantee of peace,” but that his country was “willing to work with all sides to search for a method of solving the problems through dialogue.”

On Thursday, Choe told the ruling party’s fifth-ranked official that North Korea “is willing to accept the suggestion of the Chinese side and launch dialogue with all relevant parties.”