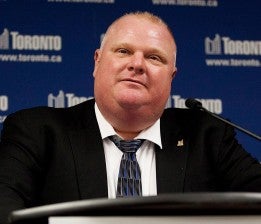 Toronto Mayor Rob Ford denies allegations that he smokes crack cocaine as he speaks to the media at Toronto City Hall on Friday, May 24, 2013. Close allies released a letter Friday urging the mayor to address a purported video that apparently shows him smoking crack cocaine. AP photo

TORONTO— Toronto Mayor Rob Ford denied Friday that he smokes crack cocaine and said he is not an addict after a video purported to show him using the drug. The mayor of Canada’s largest city did not say whether he has ever used crack.

Ford did not take questions from reporters at a news conference at City Hall held after a week of silence and after close allies released a letter urging him to address the video. The video apparently shows Ford smoking crack.

“I do not use crack cocaine, nor am I an addict of crack cocaine,” Ford said. “As for a video, I cannot comment on a video that I have never seen, or does not exist.”

Ford had been ducking the media and his only comments before Friday on the scandal came a week ago, a day after the story broke, when he called the crack smoking allegations “ridiculous” and said the Toronto Star newspaper was out to get him.

Ford said he had kept quiet because his lawyer advised him “not to say a word.”

The video has not been released publicly and its authenticity has not been verified. Reports on gossip website Gawker and in the Toronto Star claimed it was taken by men who said they had sold the drug to Ford. The Associated Press hasn’t seen the video.

The Star reported that two journalists had watched a video that appears to show Ford, sitting in a chair, inhaling from what appears to be a glass crack pipe. The Star said it did not obtain the video or pay to watch it. Gawker and the Star said the video was shown to them by a drug dealer who had been trying to sell it for a six-figure sum.

The Star also reported that Ford allegedly made a racist remark about the high school football students he coached.

Ford criticized the media for judging him.

“It is most unfortunate, very unfortunate, that my colleagues and the great people of this city have been exposed to the fact that I’ve been judged by the media without any evidence,” Ford said.

“I don’t believe the mayor,” he said. “He should resign and then go seek help.”

“The mayor is just imploding,” he said. “The mayor had an opportunity to acknowledge that perhaps he does have a problem, and to take a leave of absence, perhaps to take care of himself and his family, instead he went on the attack.”

Other councilors said the mayor wasn’t comprehensive enough and said the distraction is not over. Councilor John Parker called the statement too little too late.

“I’m not sure we’ve heard the whole truth,” Parker said. “Questions continue to swirl around him.”

Deputy Mayor Doug Holyday, a close ally of Ford who was standing near Ford during the news conference, acknowledged it’s not over.

“He would have been a lot better off had he made this statement earlier in the week but for whatever reason he did not,” Holyday said.

The allegations have caused an uproar in Canada and have become the fodder for late night TV in the U.S.

The mayor’s statement came at the end of a dramatic week. Ford fired his chief of staff on Thursday, but gave no reason for Mark Towhey’s dismissal. Towhey, who was escorted from City Hall by security, would only say that he did not resign.

Ford was fired from his job as football coach at a Catholic high school on Wednesday for reasons unrelated to the scandal over the alleged crack video. Toronto Catholic District School Board spokesman John Yan said the decision to remove Ford as the head of the Don Bosco Eagles Football program had to do with the comments the mayor made to the Sun TV Network in March that parents found offensive. Yan said Ford characterized the parent community as not caring about their kids, that the students were involved in gangs and guns and that if it weren’t for him they would be in jail.

Ford has been embroiled in almost weekly controversies about his behavior since being elected in 2010, but these are the most serious allegations he’s faced yet. The Toronto Star reported earlier this year that he was asked to leave a gala fundraiser for wounded Canadian soldiers because he appeared intoxicated.

During his campaign for mayor, Ford vehemently denied a 1999 arrest for marijuana possession in Florida, but later acknowledged it was true after he was presented with evidence. He pleaded guilty to driving under the influence and failing to give a breath sample to police.

While in office, he has been accused of flouting conflict of interest rules and making obscene gestures at residents from his car.

The controversy has drawn comparisons to the 1990 arrest of then-Washington Mayor Marion Barry, who was videotaped smoking crack cocaine in a hotel room during an FBI sting operation. Barry served six months in federal prison on a misdemeanor drug possession conviction and later won a fourth term as mayor in 1994.