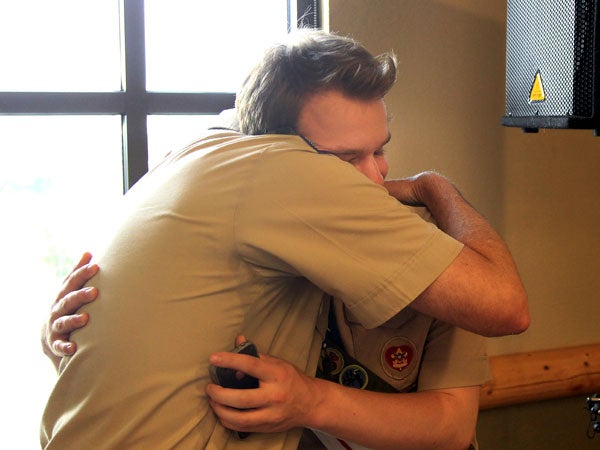 Boy Scout Pascal Tessier receives a hug from Greg Bourke, a scout leader from Louisville, Ky, after hearing of the announcement by Boy Scouts of America passing a resolution allowing scouts that are openly gay into their ranks. Mr. Tessier was in the command post for the group, Scouts for Equality at Great Wolf Lodge in Grapevine, Texas on Thursday, May 23, 2013. Tessier is a life scout who was unable to finish his eagle scout unless the resolution passed. AP

GRAPEVINE, Texas — The Boy Scouts of America is throwing open its ranks to gay Scouts but not gay adult Scout leaders — a fiercely contested compromise that some warn could fracture the organization and lead to mass defections.

The Scouts on Thursday stressed that their organization of about 2.6 million boys and about 1 million adult leaders and volunteers would not condone sexual conduct by any Scout — gay or straight.

But the bitter debate is not over. Liberal Scout leaders have made clear they want the ban on gay adults lifted as well.

Thursday’s National Council vote result was welcomed by many gay rights groups, but many religious institutions — which charter about 70 percent of the more than 100,000 U.S. Scouting units — were upset. Some threatened to defect if the ban were lifted.

“We are deeply saddened,” said Frank Page, president of the Southern Baptist Convention’s executive committee. “Homosexual behavior is incompatible with the principles enshrined in the Scout oath and Scout law.”

Some of the scouting group’s largest sponsors are relatively conservative denominations that have supported the broad ban on gay members and leaders — notably the Roman Catholic Church, the Church of Jesus Christ of Latter-day Saints and Southern Baptist churches.

The policy change takes effect Jan. 1. Thursday’s vote came after a survey of more than 200,000 leaders, parents and youth members earlier this year. Sixty-one percent supported the policy of excluding gays, while 34 percent opposed it.

However, most parents of young Scouts opposed the ban. That tracks with a growing national acceptance of gay rights in the U.S., especially among the younger generations.

Pascal Tessier, an openly gay 16-year-old Boy Scout, was elated by the outcome.

“I was thinking that today could be my last day as a Boy Scout,” Tessier said. “Obviously, for gay Scouts like me, this vote is life-changing.”

The BSA, which celebrated its 100th anniversary in 2010, has long excluded both gays and atheists. But protests over the no-gays policy gained momentum in 2000, when the U.S. Supreme Court upheld the BSA’s right to exclude gays. Scout units lost sponsorships by public schools and other entities that adhered to nondiscrimination policies.

“I’m so proud of how far we’ve come, but until there’s a place for everyone in Scouting, my work will continue,” said Jennifer Tyrrell, whose ouster as a Cub Scout den leader because she is lesbian launched a national protest movement.

The Mormon church reacted positively. “We trust that BSA will implement and administer the approved policy in an appropriate and effective manner,” an official church statement said.

The National Catholic Committee on Scouting responded cautiously, saying it would assess the possible impact of the change on Catholic-sponsored Scout units.

The BSA could take a hit financially with the new policy. Many Scout units in conservative areas fear their local donors will stop giving if the ban on gay youth is lifted.

“The Boy Scouts of America will not sacrifice its mission, or the youth served by the movement, by allowing the organization to be consumed by a single, divisive, and unresolved societal issue,” a BSA statement said.