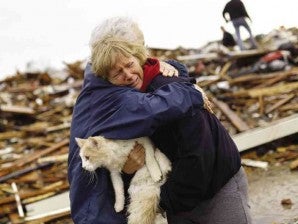 Neighbors and a cat embrace each other as families returned to the neighborhood to find their homes flattened by the Oklahoma tornado on Tuesday. AFP

MOORE, Oklahoma—Facing an eye-popping scene of utter destruction, people in this US community turned Wednesday to the towering task of rebuilding their lives after a furious tornado killed at least 24 people.

Officials said most bodies had been recovered from the sprawling moonscape that was once an Oklahoma City suburb, where Monday afternoon’s twister steamrolled entire neighborhoods and two schools. Nine children were among those who perished.

After wide fluctuations in the casualty estimates offered by officials, Oklahoma City police chief Bill Citty said 20 people had been killed in the suburb of Moore and four more elsewhere. He said the death toll could rise.

Some 237 people were injured by the hurricane-strength storm, Andy Oden, a spokesman for the Oklahoma Department of Emergency Management, told AFP.

The majority—148—suffered cuts or piercings while 85 were struck by debris and four by vehicles or other large objects.

As rescue efforts wound down, Homeland Security Secretary Janet Napolitano was headed to Moore Wednesday to “ensure that first responders are receiving the assistance they need,” said a statement from her office.

For residents whose lives were turned upside down, relief about having survived turned to heartbreak as the extent of the disaster slowly sunk in.

“It’s unreal. It’s so visceral,” said 32-year-old accountant Roger Graham as he combed through the ruins of the three-bedroom home he shared with his wife Kalissa, a schoolteacher, recovering what he could.

Curtis Carver, a 20-year veteran of the US Marine Corps who served two years in Iraq, described his hometown as a “war zone” as he waited at a police checkpoint for permission to recover keepsakes from the ruins of his house.

“It was my home, my kids’ home,” said the 38-year-old father of two, both of whom escaped harm. Carver was not allowed past because his house was in an area still deemed too dangerous.

“Now it’s gone. There’s nothing left. It’s a pile of sticks…. and they’re keeping me away,” he said.

The tornado was the strongest possible category, EF5, packing winds of more than 200 miles per hour (320 kilometers per hour), Kelly Pirtle of the US weather agency’s Severe Storms Laboratory in nearby Norman told AFP.

The epic twister, two miles (three kilometers) across, flattened block after block of homes as it struck mid-afternoon Monday, hurling cars through the air, downing power lines and setting off localized fires in a 45-minute rampage.

The epicenter of the tragedy was the Plaza Towers Elementary School, where frightened teachers and students huddled in hallways and bathrooms as the twister barreled through, and where some of the children died.

“I couldn’t hear anything but people screaming and crying,” Claire Gossett, 11, told The New York Times. “It felt like the school was just flying.”

In televised remarks from the White House, US President Barack Obama made special mention of the young victims as he mourned those lost and promised to provide survivors with the help they need to find their footing.

“There are empty spaces where there used to be living rooms and bedrooms and classrooms, and in time we’re going to need to refill those spaces with love and laughter and community,” Obama said.

Most of the widely scattered debris consisted of splinters of wood no more than a foot (30 centimeters) long and other building debris. Bigger objects were few and far between.

Here and there were touchingly personal items: a bicycle wheel, a baseball mitt, a golf ball, a red Christmas stocking, a black wig.

Volunteers helped residents unearth official paperwork like passports and tax declarations, but also collectibles such as Star Wars memorabilia and part of a coin collection, said Michael Albrecht, who was in town for a company meeting when the tornado struck and decided to help the recovery.

Monday’s tornado followed roughly the same track as a May 1999 twister that killed 44 people, injured hundreds more and destroyed thousands of homes.

Tornadoes often stalk Oklahoma’s wide open plains, but Monday’s twister struck a populated urban area. Because of the hard ground, few homes here are built with basements or storm shelters in which residents can take cover.

But that could change going forward, with Moore Mayor Glenn Lewis telling CNN he would push for an ordinance mandating storm shelters or safe rooms in new single and multi-family homes.