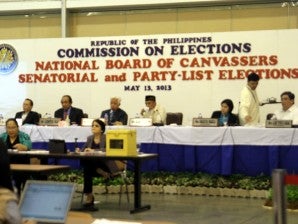 MANILA, Philippines- The Commission on Elections (Comelec) said Wednesday that it is set to make a formal partial proclamation Thursday on the winning partylist groups.

The Comelec en banc, sitting as the National Board of Canvassers (NBOC), suspended the canvassing of the partylist votes Wednesday afternoon and said that they will make a formal announcement Thursday on which partylists have already won at least one seat.

Comelec Chairman Sixto Brillantes Jr. however said that they will not yet disclose the number of votes for each partylist as the canvassing of all certificates of canvass was not yet complete.

As of Wednesday afternoon, 68 COCs have yet to be canvassed out of a total 304 COCs.

The remaining uncounted votes from the 68 COCs will no longer be enough to adversely affect the final results, Brillantes said.

Majority of the COCs however come from OAVs; there are 196 OAV COCs while the rest are from provinces and cities in the country.

Some 80 of the OAV COCs registered zero votes.