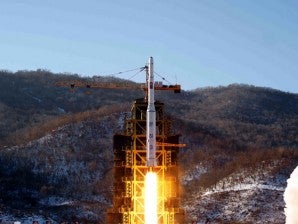 SEOUL – North Korea has appointed as its new military chief a hawkish general, widely believed to have directed the 2010 shelling of a South Korean border island, state media confirmed Wednesday.

In a brief dispatch, the Korean Central News Agency (KCNA) referred to Kim Kyok-Sik as chief of the Korean People’s Army general staff, a notch higher in the military hierarchy than his previous post of defense minister.

Kim was replaced in the ministerial position by a relatively young and little-known field commander earlier this month.

North Korea’s young leader Kim Jong-Un has substantially reshuffled his military top brass in an apparent attempt to secure his leadership since taking over the reins of power from his late father in December 2011.

Kim Kyok-Sik, 75, is seen as a hardliner and reportedly ordered the shelling of Yeonpyeong Island in November 2010 when he commanded the North’s Fourth Army Corps.

Four South Koreans, including two civilians, were killed in the shelling which had triggered brief fears of a full-scale conflict.

It is Kim’s second term as chief of general staff. He previously held the post from 2007-2009.