Winner of $590M US lotto jackpot remains a mystery 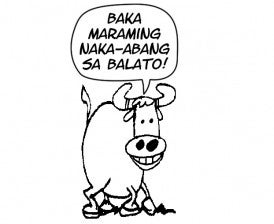 ZEPHYRHILLS, Florida—Life definitely has gotten a lot sunnier for one lucky lottery player in this Sunshine State.

But it could be an anxious wait of up to two months for people in this small Florida city to find out who the player was that won the highest Powerball jackpot in history: an estimated $590.6 million (roughly P24.2 billion).

The winning numbers—10, 13, 14, 22, 52 and a Powerball of 11—dashed the hopes of millions of Americans, who thronged supermarkets and convenience stores in recent days in hopes of winning the massive, life-changing payout.

But for the lucky ticket holder—whose identity was still unknown—the purchase proved to be the best $2 investment imaginable. He or she has 60 days to claim the lump-sum cash option, estimated at around $376.9 million, at the Florida Lottery’s office in Tallahassee.

The winner bought the ticket in a Publix supermarket in Florida.

The jackpot seems too high for many to imagine. Compare it to the budget for the city of Zephyrhills: This year’s figure is just more than $49 million. The winning jackpot is 12 times that.

“This would be the sixth Florida Powerball winner and right now, it’s the sole winner of the largest ever Powerball jackpot,” Florida Lottery executive Cindy O’Connell told The Associated Press.

Publix spokesperson Maria Brous said that there were a lot of rumors about who won. “We’re excited for the winner or winners,” Brous said. “We don’t promote or endorse the lottery; we offer it as a convenience.”

The ticket holder can’t claim the prize until Monday, when the Florida Lottery office opens, said spokesperson David Bishop. “If they know they won, they’re going to contact their attorney or an accountant first so they can get their affairs in order.”

Florida has had more Powerball winners than any other state.

Plenty of people in Zephyrhills—population 13,337—are wondering whether the winner is someone they know.

Joan Albertson drove over to Publix with her camera in hand, just in case the winner emerged. She said she had bought a ticket at a store across the street and the idea of winning that much money was still something of a shock.

“Oh, there’s so much good that you could do with that amount of money.” Albertson said. “I don’t even know where to begin.”

Zephyrhills is a small city in Pasco County, about 50 kilometers northeast of downtown Tampa. Once a rural farming town, it’s now known as a hotbed for skydiving activity and the home to large retiree mobile home parks and Zephyrhills bottled water.

And now, one lucky lottery ticket.

Sara Jeltis said her parents in Michigan texted her with the news on Sunday morning.

“Well, it didn’t click till I came here,” she said, gesturing to the half-dozen TV live trucks humming in the Publix parking lot.

“And I’m like, wow, I can’t believe it, it’s shocking! Out of the whole country, this Publix, in little Zephyrhills, would be the winner,” she added.

With four out of every five possible combinations of Powerball numbers in play, lottery executives said someone was almost certain to win the game’s highest jackpot, a windfall of hundreds of millions of dollars—and that’s after taxes.

The world’s largest jackpot was a $656-million Mega Millions windfall in March 2012.

The Powerball jackpot was “the largest in the 21-year history of the game,” the Iowa state lottery agency said in a statement.

Sales were boosted after Powerball tickets became available in California starting in April. The game presents a choice of five numbers from a pool of 59, plus a Powerball number from a separate pool of 35.

The $2 tickets are sold at supermarkets, corner stores and gas stations. Like all US lotteries, the winnings are subject to tax.

The Powerball website says the odds of winning are one in 175,223,510. For a comparison, the chance of getting struck by lighting in the United States is one in 280,000, according to the National Lightning Safety Institute.

The main Powerball website advised that “swinging a live chicken above your head while wishing for the future numbers does NOT work” to improve the chances of winning.

Buying more tickets helps “but the odds are still high and hitting the jackpot is still a question of fate,” it added.

Until just minutes before the drawing late on Saturday, Americans by the droves plunked down their cash in a last-minute push for a chance at scooping the top prize, snapping up tickets at supermarkets, corner stores and gas stations.—Reports from AFP and AP