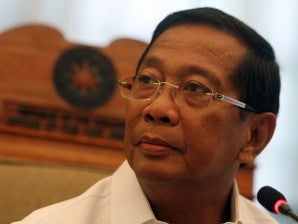 MANILA, Philippines — Vice President Jejomar Binay is adamant about undergoing a physical exam to prove that he is not afflicted with the same disease that was reportedly responsible for the rapid deterioration of the late President Ferdinand Marcos’ health.

The Philippine Medical Association (PMA) announced on Monday the forming of a team of specialists to grant Binay’s request for an examination to dispel rumors that he has been afflicted with systemic lupus erythematosus (SLE).

SLE is an auto-immune disease wherein the body’s immune system becomes hyperactive and attacks normal and healthy tissues, which leads to inflammation, swelling and damage to the skin, joints, kidneys, blood, heart and lungs.

Marcos reportedly underwent an organ transplant taking one of his son Ferdinand Jr.’s kidneys, to correct the damage the disease had inflicted on his own kidneys.

“The PMA, upon the request of Vice President Binay, is gathering a team of specialists that will examine him at the most appropriate time so that the public would know the real state of his health,” PMA president, Dr. Leo Olarte, said on Monday.

Olarte said the Vice President’s request was made during the 106th annual convention of the PMA held in Manila last Friday, where Binay mentioned his rumored condition in his speech, which he said was also circulating within the medical profession.

Binay was quoted as saying that the buzz about his health had come from physicians themselves.

“I’m sure the rumors and conclusions about my health have reached you. They say I have a lot of ailments. It just makes me laugh because a lot of these reports came from doctors,” he said.

Binay was also quoted as saying that he had been waiting for the opportunity to speak before a gathering of doctors so he could personally dispel the rumors.

“My first impression was that he was in high spirits and did not have the usual symptoms of a degenerative disease,” Olarte noted.

“However, my personal observation here cannot substitute for a formal and rigorous series of laboratory tests and personal examinations by qualified specialists that we are now forming for this exact purpose,” he added.

Olarte said the results of the tests the PMA team would be performing on Binay would be made available to the public “with his permission.”