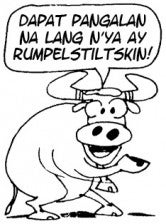 BAGUIO CITY—Incoming high school senior Ratziel is enrolling this week at Urdaneta City National High School in Pangasinan, and he will have to write down his full name. It consists of 40 first names—plus a surname.

His older brother, 21-year-old Ramuel, is also enrolling at the University of the Philippines (UP) Baguio as a sophomore. He has drawn attention, too, because he has 20 first names.

The mental training needed to help each of the siblings get their names in the right order and correctly spelled was provided by their mother, Raquel Agustin, who is teaching high school mathematics in the United States.

Father is to ‘blame’

The kilometric names, however, were all their father’s “fault.”

Their father, Rufino Ramil San Juan V, a former Urdaneta councilor and student activist and campus journalist at UP Baguio in the 1980s, decided that the bureaucracy needed to learn a thing or two about flexibility.

“My first child was born, but I was not happy when people in charge of her documents showed little imagination,” San Juan told the Inquirer by telephone from Urdaneta. “The form had a very short empty line where I was expected to fill out with my daughter’s name. I asked, ‘What if I decide to give my child a longer name?’ and got the reply, ‘You can’t do that.’”

“So I decided that I could do just that,” he said.

“My wife did have reservations as any level-headed, geometrically centered mathematics teacher would,” he said.

The family had to spend some time abroad with Raquel in 2005, but it took the NSO three years to release the birth certificates, which were prerequisites to securing passports and travel documents, San Juan said.

Acquiring a US visa was far easier, San Juan said. “The American Embassy employees simply asked the kids, who were very young at the time, to recite their names, and they did. Our papers were quickly processed.”

“My kids are used to that sideshow. When Ramuel was 6, he once confided in us that he was invited to the teachers’ lounge where he was asked to recite his name. He said they always laughed each time he succeeded,” he said.

The San Juan family stayed in Texas, where their children’s lengthy names did not matter, he said. The family returned to the Philippines in 2011.

San Juan posted the account at the CNN iReport, (http://ireport.cnn.com/docs/DOC-55822), in August 2008: “We’re a Filipino family based in Texas. Last week, we went to the Philippine Consular Office in Chicago to avail of the new machine-readable passports. I was told by the staff that the application papers of my three kids will be referred to the national office in Manila before being processed. I was informed that the new passport can only accommodate 30 characters for a given name.”

“In their original birth certificates, my first two kids’ given names (20 each) appear as ‘see attached’ (which refers to the three extra pages where the names were printed). The space provided in the official form wouldn’t suffice. In the case of my third kid, his given names (40 in all, plus a suffix) were typed in full on the top margin, overwriting the read-before-accomplishing portion,” San Juan wrote.

He said the NSO almost stopped him from registering Ratziel’s 40 names—until they were informed about two precedents.

“It turned out the precedents were my first two kids,” San Juan told the Inquirer.

He has taken pains to explain his odd name choices for his children.

In an essay titled, “Origins of the Species,” which he sent to the Inquirer, San Juan said everything began with his father, Rufino Jr., who named all his sons Rufino, following a legacy that began with his grandfathers, Rufino San Juan Sr. and Rufino Zarate.

“Quite naturally, a man with a flair for style and a way with words like our father Rufino Jr., with the blessing of our mother, Remedios, would name their four sons Rufino Ray III, Rufino Ranulfo IV, Rufino Ramil V and Rufino Ronaldo VI,” he said.

San Juan said he had since rationalized that his decision to provide his children their unique names “put a finishing touch to my father’s antics.”

That is one version to explain why Ratziel’s name included the Roman numerals CCCII, which stands for “302.”

“I decided to name my youngest the ‘Last of the Rufinos,’” San Juan wrote in his essay.

San Juan said 302 was also the number of his Masonic Lodge, and Ratziel was born on the eve of the lodge’s anniversary.

But the better justification for the lengthy names comes from poet Margaret Atwood, he said in his CNN iReport account: “The Eskimos had fifty-two names for snow because it was important to them: There ought to be as many for love.”