Kadayawan: A celebration of life 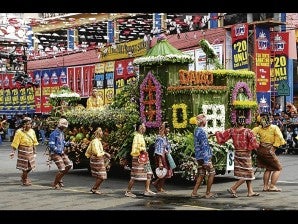 ONE OF the colorful floats featured in the Kadayawan Festival last year joins a parade on the streets of Davao City. BING GONZALES

DAVAO CITY—The red, blue, green, gold and yellow hues—bright and blinding under the August sun—mirror the intricate and unique culture of the indigenous peoples of Davao.

Drowning again the streets of Davao City next week, these colors will flutter in the air and explode into a whimsical display of the richness of native culture, no matter how diverse.

Everyone will go downtown to celebrate the Kadayawan Festival, as the indigenous peoples give thanks to their supreme being, Manama.

Tourists will learn to say “madayaw” and the poetry behind the Bagobo word for everything that is good and beautiful. And they, too, will be drawn to the enchanting smell and distinctly rich taste of durian—for their festival experience will never be complete without experiencing what is known as the “king of fruits.”

They will be on their feet as the colors dance with the rousing beatings of the “agong.” And these steps will be on the street, along with those of thousands of revelers who will swell for the “Indak-Indak sa Kadalanan,” a theatrical spectacle that portrays why Kadayawan is “The Festival of Festivals.”

The event is held when the “waling-waling” blooms, and durian and other fruits are abundant.

It is a far cry from the first celebration on the last week of September 1986, when the democratic country was still fresh from its victory over the Marcos dictatorship. The Kadayawan was then called Apo Duwaling Festival.

“The festival was a resounding success. This was evident in the large number of people who participated in it, as well as the many thousands who became a part of the festival as spectators,” then appointed Mayor Zafiro Respicio said in his congratulatory message.

The activities were very simple. The festival opened with a fair and waling-waling contest, followed by a bicycle race and parlor races. The evening’s highlight was the folk song and dance contest and the selection of the festival queen.

A parade and a battle of the bands were held the next day. Other activities included a fruit contest and a food showcase of local and international cuisine and delicacies.

The rest of the second day and the first half of the following day were dedicated to the “lumad” for their “tribal activities” that ended in a horse fight.

The Kadayawan takes its roots from the lumad of Kidapawan, then the capital town of the province of North Cotabato, according to a research document made by Felipe A. Bansag, chair of the Tribal Filipino Association of the Philippines (Tricap).

Among those who also traced the history were Quimpo S. Subuan, representative of the Tricap-Calinan District Executive Council and Datu Maximo B. Gabao, the tribal deputy mayor of the Guiangan Bagobo tribe.

Since 1975, the lumad in Kidapawan, through the Mindanao Highlanders Association (Mindahila), celebrated the Kalibongan Festival. It was also the time when leaders and members of different indigenous groups gather.

Headed by Datu Joseph Sibug, Mindahila sought the permission of Respicio, then the designated mayor of Davao, for the tribal gathering to be held in Davao.

Kalibongan was then changed to the Apo Duwaling Festival. Apo was to stand for Mount Apo, while Duwaling was to represent durian and waling-waling.

Then President Corazon Aquino particularly noted how the Apo Duwaling was happening “at a most auspicious time for rebuilding country and presenting it to the world, not only for its newfound glory as a free and proud nation, but also its resplendent beauty as a blessed land and a people of grace …”

When Rodrigo Duterte, now the vice mayor, was still mayor, the Apo Duwaling was changed to Kadayawan. On May 11, 1995, Duterte signed Executive Order No. 10 that declared the Kadayawan as an annual festival to be celebrated during the third week of August.

Over the years, this annual event has evolved, growing more and more dramatic and significant for the indigenous peoples whose consistent desire is to claim recognition and space in a society dominated by settlers.

In a promotional material, Mernadeth Sicutan, Ata-Manobo 2010 Hiyas ng Kadayawan, said this year’s staging must encompass the different tribes, the Moro inhabitants and the settlers in Davao.

“Kadayawan is a celebration of life. It is more than just one race or religion, it is about being one,” Sicutan said in her native tongue.

Ma. Filesa Marquez, festival director, has said that tourists and the people of Davao will never feel shortchanged. “There is a lot to see and experience this year.”

The city government has allotted P3 million for the festival while its partners from the private sector have raised P9.5 million. Last year’s accumulated budget was only P11 million.

“We can assure the Davaoeños can expect a merrier, more exciting and more colorful Kadayawan,” Marquez said.

Many residents believe that no matter how grandiose the Kadayawan will be, what is necessary is for the festival to make sense to the lives of the 10 groups of people in Davao, particularly the lumad.

“I think it has not evolved that much. There have been attempts to make it more in tune with our lumad, but the people by and large just see it as a festival time. Party,” said Jon Joaquin, editor of the Mindanao Daily Mirror.

Organizers are way too aware and conscious of the reason Kadayawan is being celebrated, Joaquin said. What is to be done is to affect the same awareness and consciousness to the people—the settlers.

“I think the lumad and the Moro people are still in the sidelines. It is not the fault of the organizers, though. I mean, look at the Hiyas ng Kadayawan. The winners are not mestizas. They’re real people. But do the people really notice? They even make fun of the winners for how they look,” the journalist said.

“It is the people of Davao who are failing the festival,” he added.