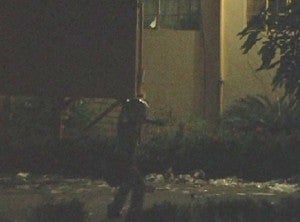 NAGA CITY, Philippines–Agitated by the long wait for the results of the elections in the fourth congressional district of Camarines Sur, supporters of Aga Muhlach vandalized the municipal hall of Tigaon just hours before the actor’s opponent, Felix William “Wimpy” Fuentebella, was proclaimed winner at the provincial Capitol in Pili, Camarines Sur on Thursday evening.

The riot started at 7:30 p.m. when Muhlach’s supporters accused the military of breaching negotiations agreed upon earlier between their leaders and Aga’s elder brother Albert and Lt. Col. Lenart Lelina, commander of the 42nd Infantry Battalion which was securing the municipal hall along the with the local police and firemen.

Around 2,000 supporters of Muhlach had been keeping vigil of the town hall since Wednesday morning to show their indignation at the “slow” canvassing of the votes for their district which they alleged were being manipulated by supporters of Fuentebella when the riot erupted.

Muhlach’s supporters agreed to allow some 20 municipal employees of Tigaon to go home after keeping them there for almost two days under the condition that Tigaon Mayor Arnulfo “Arnie” Fuentebella Jr., brother of Wimpy, be left behind along with the precinct count optical scan (PCOS) machines and other election paraphernalia inside the town hall.

As the municipal employees were leaving the hall, the supporters kept their watch on the municipal hall from the front yard of the compound while the military and police stayed at the back of the building.

Muhlach’s supporters, however, broke into a frenzy when an SUV came in on the side of the building to fetch the mayor through the side door.

The supporters accused the military of sneaking out the mayor, his brother Wimpy, and their father, the former fourth district Rep. Arnulfo “Noli” Fuentebella Sr., whom they believed were also inside.

“How could you do this to us?” the supporters, some of them crying, asked the Army.

The supporters then started throwing stones at the windows of the municipal hall, breaking the glasses in the first and second floors of the building  while Lelina and Chief Insp. Tyrone Dotimas, police chief of Tigaon, and their respective staff were inside planning strategies on how to quell the crowd.

Using tables and chairs as shield against the stones being thrown by the crowd, the police and Army went out of the municipal building and succeeding in shooing away the milled crowd outside the gates of the municipal hall.

The people, including bystanders outside, were told to move some 200 meters away from the vicinity of the municipal town hall.

Eric Amador, chairman of the National Citizens” Movement for Free Elections (Namfrel) in Goa, who arrived after the crowd was shepherded out of the municipal hall compound, was also told by the military to wait for a while before going inside the compound.

Amador was supposed to check the room where the Commission on Elections had held its canvassing of returns on Wednesday night.

The military and police, however, allowed Amador inside the municipal hall only on Friday morning.

No one was hurt during the incident as the security forces exercised maximum tolerance during the entire duration of the melee.

A few hours after later at the Capitol in Pili town, Fuentebella was proclaimed congressman of fourth district after he garnered 82,834 over Muhlach’s 80,629 at the final canvassing of votes.

Muhlach”s supporters in Tigaon went home shortly before midnight but were not immediately informed of the development.

Rolly Rodriguez, a Muhlach supporter, claimed he feared more people of the Partido area or fourth district would be pushed to join the communist rebels or New People’s Army (NPA) there because of the results of the elections in the district.

Mary Rose Bacares said she did not expect Fuentebella to win because most of the people she knows had voted for Muhlach.

Prior to the disturbance, Mayor Arnie and his staff were overheard discussing how Muhlach had been refusing to accept defeat when, they said, even Muhlach knew that based on their respective copies of the election returns, he had already lost the race.