Brillantes: ‘Since when is citizen’s arm entitled to so many things’ | Inquirer News
Close
menu
search

Brillantes: ‘Since when is citizen’s arm entitled to so many things’ 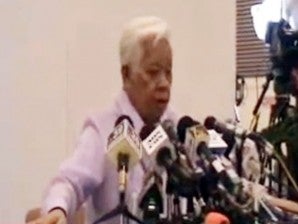 MANILA, Philippines — “Since when is a citizens’ arm entitled to so many things?”

This question was posed by Commission on Elections chairman Sixto Brillantes Jr. when asked about a poll watchdog’s plea that the Comelec provide them with data on manually uploaded election returns.

He was referring to the statement of the Parish Pastoral Council for Responsible Voting (PPCRV) and the Kapisanan ng mga Brodkaster ng Pilipinas (KBP) earlier on Thursday, “begging” the Comelec to provide the election returns which are still unaccounted for.

“Why are they asking for those? We have a resolution accrediting them as a citizens’ arm. They have functions, if they want to do something else then they should make a formal request,” he said.

So far Brillantes said that he knew of no such request.

“If they sent us such a request we would have acted on it,” he said.

But PPCRV chairperson Henrietta de Villa said that they were just trying to help the Comelec ensure a “clean, transparent and peaceful elections.”

“They can always refuse. But we are just here to help the elections to be more credible. We are not here to cast doubt on the Comelec nor are we here to ask for more than we are entitled to,” she told INQUIRER.net.

The poll watchdog has suspended the release of information on its unofficial count of the election returns pending the proclamation of the 12 winners of the senatorial race.

Once all the new senators have been proclaimed, the PPCRV will resume its unofficial count of the election returns, De Villa said.