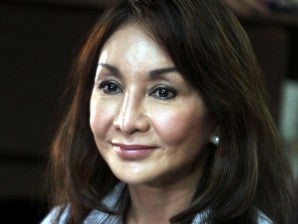 She was proclaimed winner in the 3rd district congressional race past 3 p.m. on Thursday with a slim margin of 1,984 votes.

Garcia of One Cebu-United Nationalist Alliance, received 105,424 votes while her opponent, Pinamungahan Mayor Geraldine Yapha of the Liberal Party got 103,440 votes.

“This has been the most difficult political battle that I have to face. You know what I was up against to. By the grace of God, we prevail,” she said after her proclamation.

Garcia is serving a six-month suspension starting Dec. 19, 2012, when the Office of the President found her guilty of grave abuse of authority for usurping the powers of the vice governor.
Of the five Garcias running in different elective posts in Cebu, only Gwendolyn and her brother, Nelson, won.

Another brother, Representative Pablo John Garcia of Cebu’s 3rd district was tailing Hilario “Junjun” Davide of LP in the canvassing of votes by 165,052 votes.

It was Davide’s second bid in the gubernatorial race. When Davide ran for Cebu governor in 2010, he lost by 90,000 votes to Gwendolyn.

Another brother, Vice Mayor Marlon Garcia of Barili lost in the municipality’s mayoralty race town based on final tally of the Comelec.

Reelectionist Teresito Mariñas was ahead with  19,673 votes while Marlon only had 13,629 votes.
Before Gwendolyn was proclaimed, she met with leaders of One Cebu.

In the meeting were her father, Pablo and brother Pablo John who both declined to issue a statement.
“Ongoing ang consultations sa One Cebu mayors. I’m not prepared to make a statement,” said Pablo John.

He added he had yet to meet with his legal counsel after receiving some reports on problems with compact flash (CF) cards in the province.

“I am very careful to issue any statement at this time about the conduct of the elections. I want to be sure more than anything else is the people’s faith of the electoral process,” he said.