A rogues’ gallery of election winners 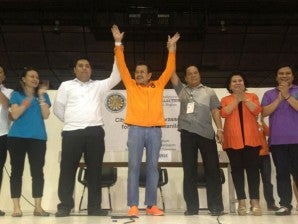 Former president Joseph Estrada is proclaimed mayor of Manila by the city’s Board of Canvassers after he defeats incumbent Alfredo Lim. With Estrada are members of his family, his wife Dr. Loi Ejercito and Sen. Jose “Jinggoy” Estrada, among others. ERIKA SAULER/INQUIRER FILE PHOTO

MANILA, Philippines—Graft-tainted ex-presidents, a dictator’s unrepentant wife and politicians charged with crimes such as murder and child rape were among the winners in the Philippines’ mid-term elections.

The Philippines has long endured a corrupt and violent brand of democracy in which politicians use their influence to avoid punishment for crimes, creating a so-called “culture of impunity” that enrages the masses.

Below are details on 10 politicians accused of serious crimes who ran in Monday’s elections. Nine of them won, according to the official tally on Thursday:

1. Imelda Marcos — 83-year-old widow of former dictator Ferdinand Marcos, who was deposed in a “people power revolution” in 1986. The first couple was accused of plundering billions of dollars from state coffers and overseeing vast human rights abuses. She won more than 88 percent of the votes cast in the family’s stronghold of Ilocos Norte province to retain her seat in the House of Representatives.

2. Joseph Estrada — Ex-president kicked out of office halfway through his six-year term in 2001 amid a popular uprising triggered by allegations he was corrupt. Convicted in 2007 of plunder while in office, but quickly pardoned by his successor. Aged 76, he was elected to become mayor of Manila, the nation’s capital, offering a platform for a potential presidential run in 2016.

3. Gloria Arroyo — Succeeded Estrada in 2001 and served as president for nearly a decade. Her successor and current president, Benigno Aquino, has made her his top target in a war on corruption, and had multiple charges laid against her. The 66-year-old, on trial and detained at a military hospital, won more than 88 percent of the votes to get a second term as congresswoman in her home province of Pampanga.

4. Ryan Luna — Ran for a second term as mayor of Bangued, the capital of a northern province, but went into hiding last month shortly after being indicted for the murder of a local political rival’s wife in 2007 elections. After appearing in a YouTube video in the final week of the campaign to deny the murder charge, he lost his post to a member of President Benigno Aquino’s Liberal Party.

5. Rodrigo Duterte — Veteran politician known as “The Punisher” for his tough stance against crime. Rights groups accuse him of encouraging vigilante groups that summarily execute petty criminals, including children. Ran unopposed to win a new term as mayor of the major southern city of Davao. An independent but allied to the Liberal Party.

6. Ronald Singson — A scion of a prominent political family in the northern Philippines, he was sentenced three years ago to 14 months in jail in Hong Kong for cocaine possession. He regained his seat in the lower house that he had vacated after the conviction. Singson’s province, Ilocos Sur, has for decades been controlled by his father, Chavit, an admitted illegal gambling kingpin.

7. Clara “Fems” Reyes — Wife of Joel Reyes, the former governor of the island province of Palawan. He is accused of masterminding the murder of an environment activist in 2011. She won a tight four-way contest for mayor of the Palawan town of Coron for the ruling Liberal Party while her husband and brother-in-law were on the run after being charged over the murders.

8. Jose Rodriguez — Ran unopposed as an independent candidate for mayor of San Marcelino town, 100 kilometers (60 miles) northwest of Manila. Identified with the national opposition alliance, Rodriguez is on trial for the alleged rape of a 12-year-old girl in 2010. He denies the charges.

9. Cipriano Violago — Won a hard-fought mayoralty race in San Rafael town, 40 kilometers (25 miles) north of the capital, as a candidate of the ruling Liberal Party. He went underground last week after a judge issued an arrest warrant for him for allegedly killing a policeman. He denies the charge, according to an aide.

10. Johaira Midtimbang Ampatuan — Won nearly 98 percent of the votes cast to retain her post as mayor of Datu Hoffer Ampatuan town in Maguindanao, representing the national opposition. She is the wife of Zaldy Ampatuan, one of the alleged masterminds of the Philippines’ worst political massacre, the killing of 58 people in 2009. The massacre was allegedly an attempt to prevent a rival’s election challenge. Zaldy Ampatuan, four of his brothers and their father, as well as several other relatives, are detained while on trial for the murders.