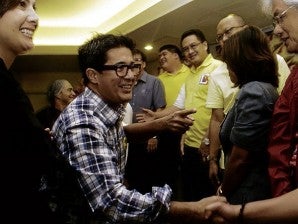 TIGAON, Camarines Sur, Philippines—About 50 people consisting of town officials, members of the municipal board of canvassers, Commission on Elections representatives and members of election watchdog groups were trapped inside the municipal hall for about 18 hours since Wednesday after a throng of supporters of actor Aga Muhlach refused to let them out.

The Muhlach supporters, numbering from between 1,500 and 2,000,  massed around the town hall and barred anyone from leaving for fear that the actor would be cheated out of his votes in the Tigaon balloting and ruin his chances of victory in the hotly contested race for the congressional seat representing the province’s fourth district between him and  William “Wimpy” Fuentebella, scion of the clan that has dominated the district for decades.

Local Comelec personnel led by municipal election officer Haide Tigue were able to leave at around 8 a.m. Thursday only because she needed to be taken to a hospital after she collapsed at 5:30 a.m. due to stress and fatigue.

This correspondent  was also among those barred from leaving the town hall until about 6:30 a.m., when a member of Muhlach’s campaign staff arrived and intervened.

Hours before that, at around 10 p.m., municipal employee Jerry Cama, who was handling food preparation and janitorial work, tried to leave but was  mobbed and beaten up by Muhlach’s supporters.

Police and soldiers sent to the town to provide security rushed him back inside the town hall, his face heavily bruised and his shirt stained with blood.

Eric Amador, head of the local National Movement for Free Elections, tried to calm down the crowd but he was shooed away.

The municipality’s mayor, Arnie Fuentebella, is the younger brother of Wimpy and this gave rise to more suspicion  among Muhlach’s supporters that the municipal returns would be rigged in favor of Wimpy.

Mayor Fuentebella, who was inside his office when the crowd started to gather at around 10 a.m. Wednesday, was likewise trapped and was hardly seen outside his office, except for the few occasions during the night when he talked to police and soldiers positioned outside his office to ask them to exercise maximum tolerance to ensure that no untoward incident would happen.

According to a member of the mayor’s staff, he did not go anywhere near the canvassing being held at the municipal session hall to avoid suspicion of manipulation of the vote count.

The canvass ended at 11 p.m., with one precinct uncounted, that of Barangay  Cabalinadan, as it was excluded due to corrupted CF card, Tigue told the Inquirer shortly before midnight.

The uncounted precinct return, which accounted for about 668 ballots, would be canvassed by the municipal canvassing board once the replacement CF card arrived, mostly likely at around noon Thursday, said Tigue.

To ease the tension, a projector was mounted outside the town hall to flash the official results from each precinct but these were ignored by the crowd, which was interested only in knowing if  Muhlach had won in the town or had been cheated.

Annie Nicolas, a leader of Muhlach’s supporters, said in an interview at around 8 a.m. that they intended to stay at the municipal hall grounds until the final results are out, including that in the CF card that was corrupted, because they believed the actor won in the municipality.