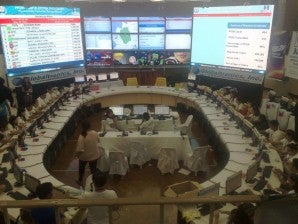 MANILA, Philippines – A little over nine percent of the election returns (ERs) were received by the Parish Pastoral Council for Responsible Voting on Wednesday, while at least eight and half percent have been encoded.

The PPCRV has so far received 7,221 of the 70,945 ERs or just 9.24 percent. These copies of the ERs are the ones printed by the optical scan (PCOS) machines just after it closes, and before the data is transmitted.

During a walkthrough of the encoding process last Tuesday, Ana De Villa-Singson, media director of the PPCRV, called these ERs the “cleanest, purest form of data.”

The PPCRV also said they are accepting walk-in volunteers for the manual encoding, which could take weeks to finish.

Meanwhile, 54,078 of 78,166 clustered precincts or 69.18 percent have been counted in the PPCRV’s partial and unofficial tally.

Team PNoy’s Grace Poe still leads the 2013 midterm elections senatorial race with 14,693,695 votes as of the 2 p.m. update of the parallel tally.