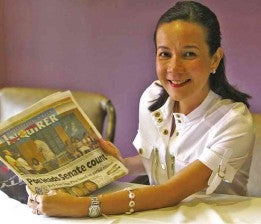 MANILA, Philippines—Former Movie and Television Review and Classification Board Chair Grace Poe (Team PNoy) still leads the partial official counting of the omissionn on Elections (Comelec) enbanc sitting as National Board of Canvassers.

The only member of the United Nationalist Alliance in the top 5 is Nancy Binay with 750,816.