Nancy Binay bashing: ‘It’s the beginning of the worst’ 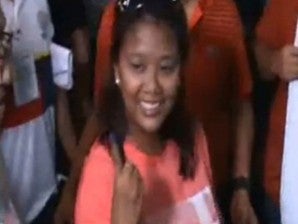 MANILA, Philippines—The Internet memes, satirical articles and scathing commentary won’t stop even when she enters the Senate, Nancy Binay has come to accept.

Binay, elder daughter of Vice President Jejomar Binay and a political neophyte who ranked fifth in the partial vote count as of Tuesday afternoon, is bracing for more heat to come her way.

“This is just the beginning. Today is not the end, it’s the beginning of worse things to come,” she told reporters on Tuesday at the United Nationalist Alliance (UNA) command center in a Roxas Boulevard hotel.

But the reality of her apparent victory “has not yet sunk in.”

“I don’t what to think about it yet. I want to see the Comelec’s announcement first before I celebrate,” she said.

On Tuesday she attended the proclamation of her brother, Makati City Mayor Junjun Binay, with her family. Their other sister, Abigail, won reelection as the representative from the city’s second district.

Nancy expects the verbal assaults to continue since she was an easy target for those wanting to get at her father.

The Vice President has made no secret of his presidential plans in 2016.

“One way of hitting my father is through me,” she said. “Actually… I feel some of the black propaganda are now directed at my family, particularly my father.”

She said that no amount of explaining would appease her haters on social media.

“I think that for those who criticize me on social media, no matter what explanation I give, no matter what I show them I can do, they will continue to look for reasons to disparage me.”

She said she planned to be an asset to her father by replicating, if not surpassing, his accomplishments. Jojo Binay was a longtime mayor of Makati before he aspired for national office.

Asked if she felt pressured because of this, she said the pressure had been there from the start.

During the campaign, unflattering cyberposts virtually slandering Binay circulated over the Internet and made the rounds by e-mail.

One, the “anyare” (what happened) meme, juxtaposed her lack of experience with the accomplishments of rival and former party-list Rep. Risa Hontiveros, noting that the neophyte was ranking higher in the surveys. “Pilipinas, anyare?” it asked.

Another post riffed on Binay’s refusal to debate Hontiveros. It said she had sought a temporary protection order (TPO) from the court so she would not be compelled to engage in a debate.

It is also not true that she had banked on her father’s name to ensure her victory, she said.

She believes she has gotten the people’s attention on her own merits, recalling that when her family went to Quiapo recently, someone referred to her father as “ang tatay ni (the father of) Nancy.”

Binay said she saw her detractors in a positive light.

She said that some of the “black propaganda” didn’t hurt her at all because they were untrue.—With reports from Niña P. Calleja and Marc Joseph Alejo

‘Game of Thrones’ spin-off on Targaryens may premiere in 2022

With the rise of e-commerce, is it also the end for our beloved CD-R King?