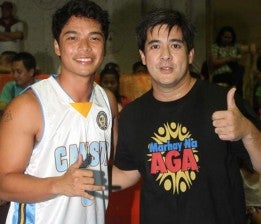 Leading gubernatorial candidate Miguel “Migz” Villafuerte of Camarines Sur shares a light moment with actor-turned-politician Aga Muhlach, who is also topping the local polls for a congressional seat in the province, in this Facebook photo from LRay & Migz Villafuerte account.

LEGAZPI CITY – Only one member of the fragmented by still influential Villafuerte clan of Camarines Sur made it in Monday’s elections, and the youngest at that, trouncing his own grandfather in the province’s gubernatorial race.

The rest of the Villafuerte clan were defeated by the widow of the late Interior Secretary Jesse Robredo and the reelectionist son of a former president.

Miguel “Migz” Villafuerte, 23, topped the race for governor with 170,841 votes, winning by a margin of almost 40,000 votes against his estranged grandfather, Rep. Luis Villafuerte (Nationalist People’s Coalition), who got 131,627 votes, according to the tally of the Commission on Elections (Comelec) posted on its website.

The administration’s candidate, Joel Cadiz (Liberal Party) was trailing behind the two Villafuertes with 97,686 votes.

Luis’s wife, Nelly, was likewise trounced in a landslide win by Leni Robredo (LP), Jesse’s widow, for the third district congressional seat that Luis will be vacating.

Leni, in an unprecedented major upset, garnered 107,496 votes, representing 76.93 percent of the votes cast in the district, against Nelly’s 29,813 votes.

In the fifth district, Rep. Salvio Fortuno (LP) won his reelection bid with 60,352 votes against challenger Felix Alfelor (NPC), who got 33,196 votes.