MANILA, Philippines — Religious groups that wield tremendous political sway with their bloc-voting members are moving to further widen their influence in Congress through the partylist system.

Based on the sample ballots distributed by the Iglesia Ni Cristo, Executive Minister Eduardo Manalo has asked his flock to vote for ACT-CIS (Anti-Crime and Terrorism Community Involvement and Support) based in the Quezon City area and 1-SAGIP (Social Amelioration & Genuine Intervention on Poverty) in Las Piñas. This is on top of its electoral wing, the Alagad partylist, represented by  Rodante Marcoleta, an INC member. It could not be verified if there were other partylist groups endorsed by INC in its sample ballots distributed in other districts. 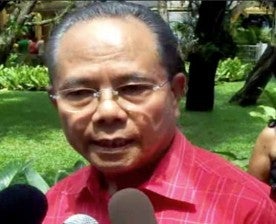 Although religious groups are banned from joining partylist organizations, their affiliates are propped up as separate advocacy groups apparently to skirt the rules and penetrate Congress such as the incumbent Buhay Hayaan Yumabong (backed up by Bro. Mike Velarde of El Shaddai group) and Cibac or Citizens’ Battle Against Corruption  (linked to Bro. Eddie Villanueva of Jesus is Lord Movement). A new partylist group, Ang ProLife, is reportedly backed by the Catholic Church.

Gabriela Rep. Luzviminda Ilagan said that the Catholic Church and other religious groups have exploited the party-list system to infiltrate Congress. She said the Comelec should clamp down on this practice to prevent the blurring of the line between religion and politics in Congress.