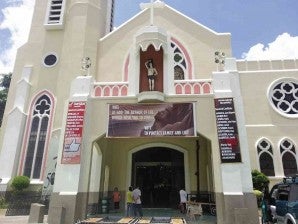 TARLAC CITY—Apostolic Nuncio Archbishop Giuseppe Pinto and Manila Archbishop Luis Antonio Cardinal Tagle led the golden anniversary celebration of the diocese of Tarlac with 50 other bishops from across the country.

Tarlac’s political leaders and candidates were also present without their campaign attire and paraphernalia.

But removed from the newly repainted Tarlac Cathedral was a banner showing a thumb’s down symbol for senatorial candidates supporting the reproductive health (RH) law. It was replaced by a white banner that endorses candidates who, as the Catholic Church believes, are “prolife and profamily.”

The white banner is labeled with what the Church describes as the “white vote.” This is supplemented by the “Team Buhay” banner that enumerates the anti-RH senatorial candidates that the Church endorses with a thumb’s up symbol.

Elaborating on the celebration’s theme, “A new heart and a new spirit,” Tagle asked the Tarlac faithful to return to the traditional meaning of a diocese.

“Let us go back to the identity of the Church as a community of faith,” Tagle said.

In light of Monday’s elections, Tagle asked parishioners to choose candidates whose vision of service is through faith.

Many candidates, he said, are running because they want to serve their country.

Earlier, when the thumb’s up and thumb’s down banners were both hanging at the cathedral’s entrances, Tarlac Bishop Florentino Cinense said: “The Tarlac voters, like any citizen of the Philippines, can chose their own candidates.”

He said the banners are just guides for the Catholic faithful in choosing candidates. “We are not very forceful,” he said.

Among those in the thumb’s down list is Bam Aquino, a cousin of President Benigno Aquino.