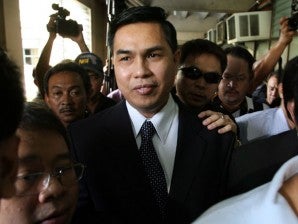 MANILA, Philippines—A witness under the protection of government and a guard at the National Bureau of Investigation helped fugitive ex-police officer Cezar Mancao to escape, according to an NBI source.

The source, who is privy to the investigation into Mancao’s escape from NBI custody last week, talked to the Inquirer on condition of anonymity.

The witness, whom the source identified only under the alias “Edong,” has issued a sworn statement to the NBI Criminal Intelligence Division and admitted that he acted as a “lookout” for Mancao during the latter’s escape.

“Edong and Mancao became very close because they were both under the WPP (witness protection program),” the source said.

The bag that Mancao was carrying when he walked out of his detention room was also found in Edong’s possession, based on the video footage of the jail’s closed circuit television camera, the source said.

“No charges have been filed yet against Edong,” the source added.

The investigation also showed that a jail guard had defied an order not to return Mancao to his cell the night before his escape, the source said.

“The jail guard could have abetted the escape of Mancao because despite an order to let him stay in the common jail area, he brought him back to his cell,” the source said.

The guards had been given instructions that after that night’s (Wednesday, May 1) last headcount at 11 p.m., Mancao was not to be returned to his cell located in a separate area of the NBI jail.

“But the guard defied that order,” the source said.

The guard, identified as Ibrahim Musa based on the CCTV footage, escorted Mancao to his cell, but did not take him inside, the source said.

“He escorted him only up to the first door of the cell and left immediately. He did not take him inside another grilled cell,” the source added.

The first door was equipped with a “door knob that could be accessed by Mancao from the inside,” the source explained.

The CCTV also showed Mancao carrying a small gym bag and a folding stool when he ran out of his cell.

“The stool was used by Mancao as patungan when he jumped over the fence on the UN Avenue side of the NBI,” the source said.

Mancao has maintained that the NBI guards had no hand in his escape, but admitted having had help from someone inside the bureau.

“Musa did not help me, but someone from the bureau is helping me and my escape was planned, after I received information of the plans to bring me to the Manila City jail in the morning,” he said.

He said NBI jail regulations were lax and “guards allow its inmates to purchase their own padlocks, like I did.”

He also talked of alleged anomalies in the NBI detention cell.

“There are people there who are making money out of the detainees in the NBI jail,” he said.

He also confirmed that there have been instances when NBI trackers have pinpointed his location, but “they always arrived hours after I have left the area.”

He reiterated that he will not surrender until a court decision to discharge him as a witness in the Dacer-Corbito murders is reversed.

Mancao slipped out of the NBI jail after a regional trial court handling the case discharged him as a state witness, retaining him as an accused in the double murder and ordering his transfer to the Manila city jail.

Mancao said he decided to escape for fear that his life would be in danger if he is detained at the city jail.—With Tessa Distor and Christine Avendaño