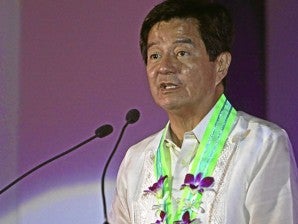 Lim announced his resignation at a news briefing in Malacañang Friday.

“My reason for resigning is personal. I would like to spend more time with my family. My responsibilities require a great deal of travel and time away from my loved ones,” Lim said in a separate statement.

“I leave the President’s [Benigno Aquino III] Cabinet gratified that I have laid the foundation for strong tourism growth, in keeping with the President’s vision of inclusive growth,” he said.

Malacañang, through Lacierda, acknowledged the achievements of Lim during his stint as tourism chief, saying that international visitors increased to an unprecedented level: over 3.7 million arrivals between July 1, 2010 and June 30, 2011.

“This was an increase of over half a million visitors over the previous 12-month period. Domestic travellers increased from 25 to 28 million. An estimated 400,000 jobs were created as a result,” Lacierda said.

“All these are remarkable achievements. He has been a conscientious and highly dedicated member of the President’s official family. He has put in place enduring policy foundations for tourism’s growth in fulfilment of the President’s vision; and he has done so with tenacity, integrity, and vigor. We wish Mr. Lim every continued success, as he returns to private life, to enjoy more time with his family,” Lacierda said.