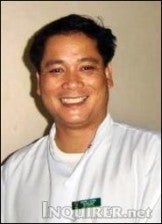 Marlon Dichavez Recamata, a hired gun from Pagbilao, Quezon, who signed up for the hit job along with two other accomplices for a fee of P150,000, was caught by a pursuing firetruck crew immediately after he shot the radio commentator inside an ukay-ukay store on Jan. 24, 2011.

The decision, penned by Regional Trial Court Judge Angelo Arizala, also ordered Recamata to pay the victim’s family a total of P132,103.50 in damages, including P50,000 for moral and P30,000 for exemplary damages.

Recamata had pleaded guilty at the outset of his trial. He was ordered transferred from his current detention cell at the City Philippine National Police holding facility to the Iwahig Prison and Penal Farm.

Recamata’s conviction was witnessed by the slain broadcaster’s widow Dr. Patria Gloria Ortega, and their children.

“This is a milestone in our arduous quest for justice. But the more important task at hand is to find Joel Reyes and his brother and let them face the court,” Patria told the Inquirer.

Justice Secretary Leila De Lima said in a text message: “This development is of course good news for us. But, justice can only be fully served in that case if the masterminds are also found and punished.”

The Reyes brothers, accused as masterminds in the case, have remained in hiding, even after the Court of Appeals ruled in their favor on the legality of the panel of prosecutors of the Department of Justice that found probable cause against the suspected masterminds.

Ortega, an environmentalist and anticorruption advocate, had been attacking top Palawan provincial officials in his radio program, particularly the alleged misuse of billions of pesos in royalties from the Malampaya natural gas project.

In his affidavit, Recamata said that a certain Rodolfo Edrad Jr., aka Bumar, had hired them in Pagbilao, Quezon, to kill Ortega.