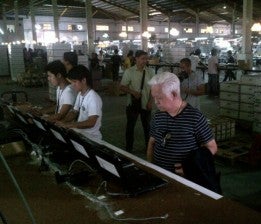 MANILA, Philippines – Survey firms have appealed to the Commission on Elections (Comelec) Monday to defer the implementation of its resolution ordering them to disclose their subscribers.

The survey firms said they will go to the Supreme Court (SC) to seek a ruling on the matter.

Comelec chairman Sixto Brillantes Jr. told reporters that Social Weather Stations (SWS) and Pulse Asia have written to him asking for the implementation of Comelec Resolution 9674 to be put on hold.

Resolution 9674 states that: “the amount spent by candidates and political parties for surveys forms part of their campaign expenditure which must be disclosed by the candidates and reported by the survey firms to Comelec.”

The resolution stemmed from a request by Navotas Representative and United Nationalist Alliance spokesman Tobias Tiangco to the Comelec asking it to compel survey firms to disclose who their subscribers are.

Brillantes said that the survey firms are asking for more time since they will appeal for a temporary restraining order before the SC.

“We will give them a chance to get a TRO before the SC,” he said.