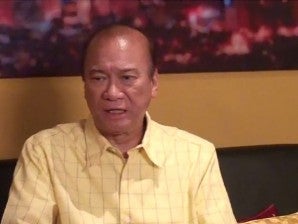 Satur Ocampo, Bayan Muna president, said “Jun Magsaysay showed a high degree of integrity, diligence and competence in serving the public interest” when he was senator from 1995 to 2007.

“Particularly commendable was his firm determination to uncover, document, and recommend the prosecution of accountable public officials in the nefarious P750 million fertilizer fund scam under the Arroyo government,” Ocampo said in a statement furnished the Philippine Daily Inquirer on Saturday.

He said Magsaysay was also evidently pro-poor when he supported the call for legislated substantial wage hikes for workers and helped increased government support to farmers.

“He champions rural industrialization as an important program for economic development,” Ocampo said, adding that Magsaysay “deserves to be returned to the Senate.”

In endorsing the other senatorial candidates, Ocampo said the Makabayan Coalition found common ground with them on issues affecting the masses.

For example, in endorsing Cayetano and Madrigal, Makabayan said the two senatorial candidates “championed several people’s issues and advocacies, which we deem important to the life of our nation.”

Makabayan has been defending its adoption of candidates from the administration since it made the decision public last year.

Casiño earlier said the inclusion of the candidates in Makabayan’s ticket was “not for political convenience” but for shared advocacies.

Liza Maza, Makabayan co-chair, said the “adopted” candidates went through a month-long process and the Makabayan’s selection was not made in a flash.

“We talked based on principles and programs and after a month, we reached a decision that the six senatorial candidates will be under the Makabayan coalition,” Maza earlier said.