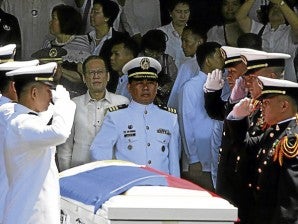 ‘OLD WINTER’S SONG’. President Aquino hails National Scientist Fe del Mundo and inducts her into the Order of the Golden Heart with the highest rank of Grand Collar during Thursday’s state funeral rites at the DoST building in Bicutan, Taguig City. Del Mundo was sent off by kin and admirers to the tune of “Autumn Leaves,” her favorite song. EDWIN BACASMAS

The words of her favorite song spoke the truth for those she left behind: “Since you went away, the days grow long / And soon, I’ll hear old winter’s song / But I miss you most of all, my darling, when autumn leaves start to fall.”

Sent off by loved ones and admirers with the somber lines of “Autumn Leaves,” National Scientist and eminent pediatrician Fe del Mundo was posthumously inducted on Thursday into the Order of the Golden Heart, a presidential recognition for distinguished public service.

President Aquino conferred the honors on Del Mundo through her nieces, Elisa Bengzon and former Ambassador Luz del Mundo, during necrological rites held at the Department of Science and Technology (DoST) compound in Taguig City.

Del Mundo, who would have turned 100 on Nov. 27, was later interred with full state honors at Libingan Ng Mga Bayani also in Taguig.

“Many titles and awards could be appended to the name Fe del Mundo. With her exceptional intelligence and noteworthy dedication, she took the path of becoming a pediatrician, scientist, teacher, researcher and champion of public health,” Mr. Aquino said in his eulogy.

“But despite her successes, we came to know her as a simple Filipina. Most of all, she was a great Filipino,” the President added.

“May (her) passing bring about the birth of one thousand more Fe del Mundos, who would be ready to use their knowledge and talents for the upliftment of the Filipino and would not hesitate to take on sacrifices for public service,” President Aquino said.

Also at the memorial, her granddaughter-in-law, Lorna Reyes, paid final tribute to her lola with a moving rendition of the latter’s favorite Nat King Cole classic.

Single and childless but considered a mother to the countless children she had treated and nurtured, the esteemed doctor—who was also an educator, author, inventor and wartime heroine—died of a heart attack on Aug. 6 at the 54-year-old hospital she established on Banawe Street, Quezon City.

Bengzon also shared how her aunt, in her own words, may have summed up the legacy she had left behind.

“I am happy to leave behind my life’s work as an expression of gratitude to the Almighty for the privilege of service to mankind,” said Bengzon, quoting the late doctor.

“Even in death, her memory will live on because of those whose lives she touched,” Montejo said of the National Scientist, a title conferred by the government on Del Mundo in 1980.

To her community of health workers, Del Mundo led a life of sacrifice for a vocation she had pursued for more than half a century.

Shortly before World War II reached the Pacific, the University of the Philippines alumna flew home from her graduate studies in America.

Through the Red Cross, she later helped take care of the children of Allied expatriates then incarcerated by the Japanese on the University of Sto. Tomas campus in Manila.

After the war, she began fulfilling a lifelong dream by selling her house and other properties to build the Children’s Memorial Hospital (renamed Dr. Fe del Mundo Medical Center) in 1957.

In the 1970s, she invented a low-cost incubator for premature babies and a warming apparatus made of bamboo for babies with jaundice especially in rural communities that had no electricity.

Author of some 150 studies published in local and foreign medical journals, she also did research on viral diseases that mostly afflict children, including measles, polio, chicken pox and dengue fever, which helped doctors formulate better prevention and treatment methods.

“She is a model public servant, a citizen worthy of the deepest gratitude of the Filipino nation,” Montejo said.

Mr. Aquino paid his last respects to Del Mundo by inducting her into the Order of the Golden Heart with the highest rank of Grand Collar.

“I am happy to hail Fe del Mundo… in recognition and admiration of her exceptional contribution and service to uplift the conditions of our marginalized countrymen in society,” he said.

“With this kind of care and service, the legacy of our Grand Dame of Philippine Pediatrics and Medicine would live on,” the President added.

The government established the Golden Heart Presidential Award in 1954 during the administration of President Ramon Magsaysay.

It is presented to individuals who contributed noteworthy assistance and encouragement for the improvement of the moral, social and economic conditions of the Filipino masses, especially in the rural areas.

Helen Keller, the deaf and blind American advocate for the disabled, first received the award in 1955.

The President said Del Mundo also blazed the trail when, in 1936, she became the first woman and first Asian to be admitted to Harvard Medical School.

“She exceeded what society saw from her gender and country of origin. This showed our ability to be at par with the rest of the world in the field of medicine,” he said.

“Even if she pursued her expertise abroad, she chose to return and serve in her own country to bring health service to our countrymen in far-flung areas,” he added.

In 1966, Del Mundo received the Elizabeth Blackwell Award, an honor given to women of outstanding service to humanity.

Given in New York, the award placed her in a league that also included anthropologist-author Margaret Mead, tennis star Billie Jean King and the first woman US secretary of state, Madeleine Albright.