Kris Aquino may be X factor to mess up Magic 12 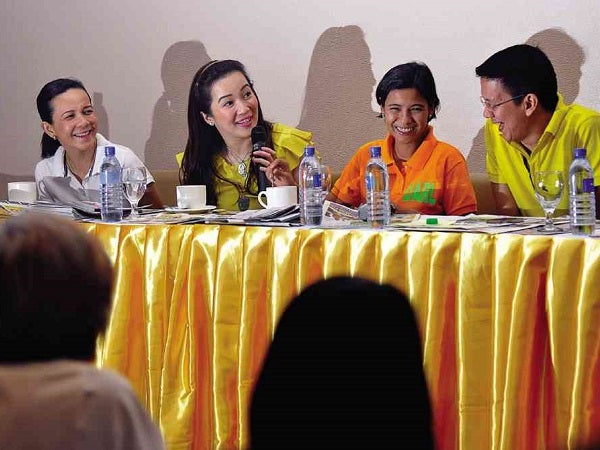 THE KRIS AQUINO FACTOR President Aquino’s youngest sister Kris presides over a press conference in General Santos City with two of the Team PNoy senatorial candidates she is endorsing—Grace Poe and Chiz Escudero. With them is General Santos Mayor Darlene Antonino-Custodio. Opposition figures admit “the Kris factor” may spell the difference between winning and losing the senatorial derby. CONTRIBUTED PHOTO

A senatorial candidate of the United Nationalist Alliance (UNA) on Saturday belittled the impact President Benigno Aquino III’s younger sister might have on the Team PNoy ticket at this stage of the campaign.

Former Sen. Ernesto Maceda downplayed the so-called “Kris factor” on the likes of Senators Francis Escudero and Alan Peter Cayetano, noting that the TV host was endorsing candidates who were already doing well in the surveys. Besides Escudero and Cayetano, Grace Poe also got the support of the President’s sister.

“We don’t think it would make much of a difference. We’re not putting any weight to it, not even half,” Maceda told the Inquirer in a phone interview.

Whatever impact Aquino might have on the likes of Escudero, Cayetano and Poe “we will only know in due time,” he added.

“We’re talking here of a vice president who has consistently scored high approval and trust ratings,” he said, echoing a detail often mentioned by Binay on the campaign stage with UNA candidates.

Maceda said many local officials have also been throwing their support behind Binay and his ticket in preparation for the 2016 presidential election.

“Many of them believe Jojo Binay will be the next president so this early, they want to score good points with him,” he said.

But Rep. Toby Tiangco, UNA’s campaign manager, disagrees. He said the presence of Aquino in the Team PNoy campaign would “definitely” be a factor, especially to the particular candidates she was helping.

“They’re lucky to have someone like Kris Aquino,” he said, noting that her endorsement could affect the configuration of the Magic 12 come Election Day.

“Take note that these candidates are separated by a slim margin in the rankings. So her endorsement could help a lot.”

Aquino has been all over the campaign trail less than two weeks before elections.

She joined Escudero and Poe for two straight days to endorse them in campaign rallies that took to General Santos City and Davao City on Thursday and Cebu City and Tacloban City on Friday.

In Cebu City, the bigger story was her pronouncement that she was eyeing the gubernatorial post in Tarlac province in 2016.

The Aquinos and Cojuangcos have controlled politics in Tarlac for many years, with President Aquino serving as district representative for three terms before winning a seat in the Senate. He served for three years and went on to become President in 2010.

The President’s sister does not find anything wrong with political dynasty, explaining that children of politicians are expected to follow in their parents’ footsteps.

In a press conference in Tacloban City, Aquino said dynasty is good if parents have been doing well and their children have the capability to serve the country.

Aquino pointed out that even children of movie personalities aspire to follow in their parents’ tracks.

“They grew up in that kind of business. That’s where their parents earn a living,” she said.

Aquino said that if elected, the people could expect her to be an honest leader who would take care of public funds.

“What else can you say about me? My life is an open book from the time I was 12. I am now 42. So you know I am honest and I will take care of the government coffers,” she said in Filipino.

Aquino cited her diligence in paying her taxes correctly, which had made her the individual top taxpayer of 2011 paying P49.87 million in taxes, according to the Bureau of Internal Revenue.

She reiterated her desire to run for a local elective position in 2016 like her father, slain Sen. Benigno Aquino Jr., who started as a mayor of a small town in Tarlac.

If she would ever consider running in a big city, she said in jest that she would look for one where the mayor was already on his last term.

“I will buy a house there. Maybe in Manila. I will live with Noy at the Bahay Pangarap (President Aquino’s official residence by the Pasig River) just to establish residency,” she said, laughing.

A lively political rally with short political spiels and a huge crowd bouncing to music from a pop rock band so impressed the President’s sister that she said this should be the way to go in the 2016 campaign—if Escudero decides to run for president.

Aquino was in the city also to endorse Tacloban City mayoral candidate An-Waray Rep. Bem Noel and his local ticket.

“I told Chiz (Escudero’s nickname) that in 2016, if he runs for president, this should be the way to campaign,” Aquino said after asking the band to play another upbeat song she and the candidates can dance to.

Escudero, however, opted to downplay Aquino’s remarks, saying her endorsement of his candidacy is only for the senatorial elections in May.

“I was flattered by what she said in the heat of the moment in the rally but, no, it was not an endorsement,” Escudero told the Inquirer later.

“She herself had earlier said that 2016 is too far and that she is only focused—the same with me—on the 2013 elections,” he added.

Escudero said the remark might even encourage more black propaganda against him as the campaign period draws to a close.

Aquino made sure the more than 20,000 in the stands and in the field of the stadium that Noel is the President’s close ally.

Aquino said that President Aquino sent word through text messaging that she should let the people of Tacloban know that Noel was a loyal ally of the Aquino administration.

She added that one call from Noel to President Aquino on behalf of the city would mean immediate attention from the national leadership.

Aquino told the crowd that the President himself will be in Tacloban next week to personally endorse Noel.

“Region 8 has long been a laggard in terms of development. If you’re already the mayor of Tacloban City, you should pull up the entire Region 8,” Aquino said.