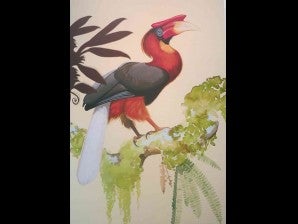 A RUFOUS hornbill as painted by David Tomb, one of the images on exhibit at the Ayala Museum in Makati City.

It is both “a source of national pride” and “a shameful situation.”

That’s how organizers of a recent conference and ongoing exhibit in Makati City described the state of one of the country’s wildlife treasures, the native hornbill.

The urgency of saving the Philippine varieties of the forest-dwelling bird amid man-made threats moved conservationists around the world to hold the quadrennial International Hornbill Conference in the country, from April 24 to 26 at the Ayala Museum. The photo and painting exhibit on the museum’s second floor runs until tomorrow.

Out of sight and out of mind for most city dwellers, hornbills were spotted in Metro Manila last year, but the rare sightings were taken as an alarming sign that they probably sought refuge in the city due to rapid habitat loss in the countryside.

But they could also be “escapees” or pets that got away from urban households, since native hornbills are not known for island-hopping, according to Mike Lu, president of the Wild Bird Club of the Philippines (WBCP) which mounted the exhibit.

“Other countries share borders so their hornbills travel. Ours stay put,” Lu said of the fruit-eating birds, which are known as excellent seed-dispersing agents and as natural alarm clocks because of the noise they regularly make at certain hours of the day. 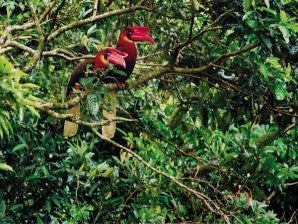 A PAIR of Rufous hornbills stands out in this photo taken by Neon Rosell.

And yet they seem to be unloved in their own homeland: Nine of the 57 hornbill species worldwide have been found to be endemic to the Philippines, but the country is now bleakly on the bird lovers’ radar for losing the Ticao Tarictic of Masbate province, the first hornbill subspecies on the planet to become extinct.

“This is almost certainly the first time a hornbill has been driven to extinction by human activity anywhere in the world— a shameful situation for the country as a whole,” according to the Protected Areas and Wildlife Bureau, whose posters formed part of the exhibit.

Seven of the Philippine hornbill species are now considered endangered, the WBCP added. “These magnificent birds are a source of national pride and yet are threatened to the brink of extinction due to human-related pressures.”

Organized by the Thailand-based Hornbill Research Foundation, the conference saw the relaunch of a nationwide conservation program to be led by the Philippine Biodiversity Conservation Foundation Inc. (PBCFI).

The program will include intensified campaigns to protect forests, rescue and breeding efforts, island-wide surveys and research, and mobile education teams targeting communities near or within hornbill habitats, PBCFI director William Oliver said in his presentation.

For city folk, the first step is awareness—and not keeping hornbills as pets, Lu said. Just imagine the consequence: The males of some hornbill species are known to feed their nesting mates. Catch one for your amusement and you practically kill his entire family that is left behind.

“So many people capture them, keeping them just for fun,” Lu noted. Due to hunting, nest poaching and deforestation, “they are getting harder to spot. They’re no longer seen in areas where there were flocks before.”

And if these threats go unchecked, the Philippine hornbill may indeed just end up as pictures in a museum.