Learning the hard and filthy way from a bus ride 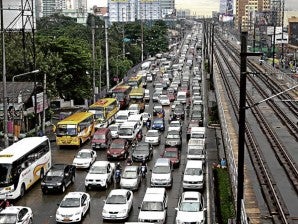 (Editor’s Note: INQUIRER.net is posting a first person account by our sports reporter, Celest Flores, of her experience with a bus thief as a warning to our readers who will be in similar situations in the future. We apologize for what may be “objectionable content” but Ms Flores tells her story in the interest of public service.)

MANILA, Philippines — If you ever, out of nowhere, find spit and phlegm — on your shirt while riding the bus — don’t reach for your tissue just yet. Trust me.

It was at around 2 p.m. on Thursday, when I fell prey to what they call the “Dura-dura Gang,” as I was riding the G-Liner bus on my way to San Juan Arena from Morayta.

In all my years as a student and now reporter, I have not lost anything to thieves as I’ve always been careful.

But this time, they went just a little too far — a spit away to be exact.

There were a few people riding the bus that afternoon of Labor Day. I was seated alone beside the window, like I always do, a few rows behind the driver.

This G-Liner bus didn’t pass by its usual route of Legarda-Magsaysay Boulevard but instead went through España, Lacson and then Magsaysay.

When we reached “Stop and Shop”, the corner of Magsaysay and Old Sta. Mesa road, a guy wearing a striped green and white shirt with a cap carrying a big black bag, rode the bus and sat beside me.

I gestured to the passenger to stay near the window since I was 15-20 minutes away from my stop but he insisted that he was nearer.

That was my first mistake. I, then, moved to the side and looked out the window. My bag  which had my valuables — my Blackberry, my iPod Touch and money — was wrapped around my arms.

But these thieves are smart.

After a few minutes, the guy beside me pointed out that I had spit on my left shoulder. I instantly looked at it and saw the sleeve of my blouse full of spit with green phlegm.

I was caught off guard and panicked. I opened my bag and realized that I didn’t have a pack of tissue with me. So I took out my hand sanitizer and a piece of plastic and started cleaning the mess.

That was my worst mistake because at that moment, it became easier for the thief to do what he had set out to do.

And as I wondered where this nasty liquid came from, the suspect confused me even more by pointing to my back and hair and telling me how bad the smell was.

The thought of having someone else’s phlegm dripping on the sleeve of your blouse is enough to make you gag. Imagine if it was real.

I was so preoccupied trying to remove the spit on that I even took out my mirror only to find out that there was more of the filth on my back.

Having run out of plastic, I resorted to using the bus’ curtains to remove the rest of the spit and phlegm.

That was when the guy hurriedly stood up and went down the bus near SM Sta. Mesa, just a few minutes from where he rode. He had gone down when I realized that my new office-issued Blackberry was missing from my bag.

In one afternoon, I learned:

1. Always trust your instinct. Anytime you feel like you need to transfer seats when you see or feel anything suspicious, do so. The nearer the exit, the better.

2. Always be alert and vigilant. Look around you and see who’s sitting beside you. Don’t get too comfortable even if you think they don’t look suspicious. When in a public vehicle, no matter how tired you are, never let your mind drift.

3. Always secure your stuff . Make sure you zip back your bag everytime you have to get something — spit or no spit. This way, the thief won’t get a chance to touch your belongings.

4. Do not — absolutely do not — talk to the stranger beside you. Ignore him. I read in some blogs that they may pressure you to remove the spit, or make you go down the vehicle to clean it — but don’t give in.

5. Always be informed. Read and watch the news. Social media, a more familiar platform, has been a big help in spreading the modus operandi of these criminals who prey on commuters.

While I pray it doesn’t happen again, I can now get the chance to do things differently if it does.