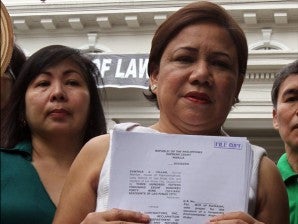 “The Court finds neither legal nor factual bases with which to grant the privilege of the writ of kalikasan. Wherefore, the petition is denied for lack of merit,” said the appeals court ruling concurred by Associate Justices Rebecca De Guia-Salvador and Samuel Gaerlan.

Villar asked the Supreme Court last year to stop the implementation of a 635-hectare reclamation project in Manila Bay which she said may impede the natural river flow in her city and destroy the remaining 175-hectare mangrove forest and marine habitat in Las Pinas and Paranaque that may cause flooding in many villages.

The firm — All Tech Contractors Incorporated — is pursuing the reclamation of 635 hectares of foreshore areas in Manila Bay beside the 175-hectare protected mangroves, lagoons and ponds known as the Las Pinas-Paranaque Critical Habitat and Ecotourism Area.

Included in her petition were the signatures of a total of 315,849 residents in their city and findings of a hydrological services consultant she tapped in support of her petition.

She said the project would cause massive flooding in 65 coastal villages since it will impeded natural flow of water to the bay.

She added that the project would destroy one of Metro Manila’s last nature reserves and bird sanctuaries—the Las Piñas-Parañaque Coastal Lagoon or the 175 hectares of Salt marshes, tidal areas and three mangrove-clad islands that serve as home or resting spot for dozens of bird species, including the globally threatened Philippine duck and Chinese egret.

The high court issued the writ and ordered the Court of Appeals to conduct further hearing on the case.

But the appeals court, in its ruling said Villar failed to present evidence to support her allegations that the project would cause environmental damage.

“No credible, competent, and reliable evidence had been presented to support the allegations that the proposed coastal by project would cause environmental damage of such magnitude as to prejudice the lives, health or properties of the residents of Paranaque and Las Pinas. These apprehensions had been disproved by objective, expert and scientific studies of reputable entities with vast international experience,” the decision stated.