Brillantes lashes out at Comelec arch-critics 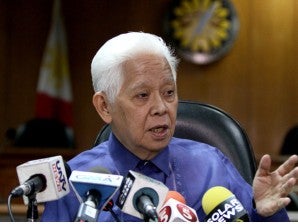 MANILA, Philippines—Commission on Elections Chair Sixto Brillantes Jr. on Thursday lashed out at the poll body’s critics as the final testing and sealing (FTS) of all the 78,000 automated machines to be used in the May 13 elections began without any major glitch.

Brillantes said there was an “orchestrated plan” among Comelec critics—naming former Comelec Commissioner Gus Lagman, former Economic Planning Secretary Solita Monsod, and the Automated Election System (AES) Watch among them—to “destroy” the credibility of the coming elections but that the results of the initial FTS yesterday showed that they were wrong.

“I’m saying that the final testing and sealing went smoothly. We’ve already predicted that there won’t be any problem. All of those that happened in 2010, we’ve already corrected,” Brillantes, who was at the Gotamco Elementary School in Pasay City  on Friday said.

“Now, this (the initial FTS results) is the proof that we made corrections. What happened in 2010 was not repeated,” he said.

“If there is a major hitch while I’m here, I’ll know what to do on Election Day.”

He added that if he were the jinx, “I’ll go to America so that our elections would go smoothly.”

In 2010, the Comelec had to recall 76,000 compact flashcards that the precinct count optical scan (PCOS) machines were to use for the elections after holding an FTS.

Yesterday, the Comelec held the FTS in at least 10 percent of the 77,829 clustered precincts in the country and declared that no major problem was reported.

Brillantes disclosed that that 60 percent of the precincts would conduct their FTS on May 6.

Brillantes inspected Precinct 24 at the Gotamco Elementary School, where a manual count was conducted to find out if the results tallied with the machine count. Those in charge at first did not plan to conduct a manual count but Brillantes ordered them to do so.

Geraldine Milo, chair of the Board of Election Inspectors (BEI) for Precinct 24, said the manual and machine counts tallied, while noting that there was one “overvote” for the party-list groups and the city council.

After the testing of the PCOS machines, they were sealed and brought to the school library, where they will be put under guard, to be reopened only on election day.

“We really expected that they would tally. If there will be any discrepancy, these would be very few. I hope this will also happen in other parts of the country so that our detractors and critics would tone down their language,” Brillantes said.

The Comelec chief denied allegations of critics that there was no source code for the PCOS machines, and that safeguards like digital signatures and ultra violet (UV) light to detect fake ballots were removed.

Brillantes said there was a source code for the PCOS machines but this would not be available for review by political parties because this cannot be released due to the corporate fight between PCOS provider Smartmatic International and Dominion Voting System.

“And then they say there are no UV lights. In 2010, there was none but now there is. Why do they keep on saying there’s none? It distorts the mind of the people at this point,” he added.

Brillantes scored in particular Lagman for saying that “something might still happen” between the time the PCOS machines were sealed and Election Day.

“That is so mean. We are now being accused of cheating? I think it’s the worst kind of accusation that a former commissioner can do,” Brillantes said.

“I think he is already so desperate for the elections not to proceed to say that there would be cheating in the last week (before the elections) and the only ones that could cheat is Comelec and Smartmatic,” he added.

Brillantes said Comelec critics were becoming louder in their criticisms because “they don’t want the elections to proceed.”

“They don’t want the elections to proceed so that they can say, ‘See, we were right.’ But we have contingency plans that you (Lagman) don’t know about because you did not visit us after you left Comelec,” he said.