‘This is the handiwork of Lacson’ — Mancao 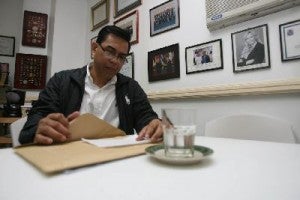 MANILA, Philippines- Former police officer Cezar Mancao on Thursday said it was Senator Panfilo Lacson who was behind the move to transfer him from the National Bureau of Investigation custody to the Manila City Jail.

In an interview with a cable television news, Mancao, an accused in the celebrated Bubby Dacer-Emmanuel Corbito double murder case in 2000, also said he escaped because “my rights has been violated.”

Dacer was a publicist whose clients involved public figures in the government. He and his driver were abducted on Osmeña Highway in Makati in November 2000. Their charred bodies were found in Cavite.

Mancao told the cable television news that Lacson was plotting to get at him.

“Alam ko na may plano na talagang ipapatira ako (I know somebody is planning to get back at me),” he said.

When the anchorman asked Macao if the person he was referring to was Lacson, he said: “Sinabi mo na (you’ve said it).”

Mancao was supposed to be transferred to regular jail on Wednesday but it was a holiday. He escaped Thursday at 1:14 a.m., as recorded by a security camera.

Mancao was discovered missing in an inspection about three hours later, the NBI said.

Mancao was a former intelligence officer of the Philippine National Police who, along with Michael Ray Aquino, has been charged with two counts of murder for the death of Dacer and Corbito in 2000.

He escaped to the United States and extradited to the country in 2009.

Mancao was admitted as government’s witness against then principal accused Senator Panfilo Lacson. However, he remains as one of the accused.

In the lower court, accused Senior Police Officer 4 Marino Soberano, SPO3 Jose Escalante, and SPO3 Mauro Torres through their lawyer Dante David asked the Manila Court to transfer Mancao to the City Jail where his clients and 21 others are detained.

Lawyer Dante David, in his motion, said Mancao should be considered as an ordinary inmate.

David said the Constitution provides for equality, therefore no special treatment should be accorded to him.

The Court of Appeals branded Mancao’s testimony as inconsistent prompting them to drop the two counts of murder against Lacson.

Then, the Manila Court ordered Mancao’s transfer to City Jail.