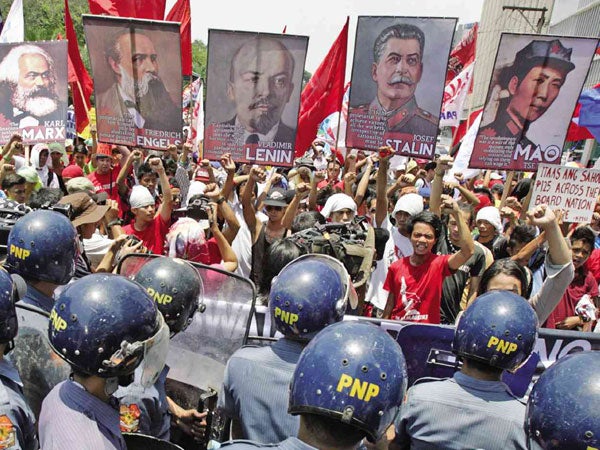 Except for their overheated rhetoric and the burning of the effigies of President Aquino and US President Barack Obama, which matched the sweltering heat, the country’s workers kept Wednesday’s Labor Day observance peaceful.

So orderly were the marches and rallies in Metro Manila that the protesters had cleared the streets by 6 p.m.

Police reported no untoward incidents in the capital and other parts of the country.

With President Aquino resting in his hometown in Tarlac province, it fell on Labor Secretary Rosalinda Baldoz to plead with the workers to give the government more time to deal with their problems. She said that Aquino planned to meet the labor leaders regularly; the next one will be on May 30.

The Catholic Church, in turn, reminded government and business of the primacy of the human person over capital and profit.

In his homily during a Labor Day Mass held at Quiapo Church and attended by the leaders of various labor groups, Manila Archbishop Luis Antonio Cardinal Tagle expressed concern about “international trends” in the labor industry where workers are “classified” and their “classifications” are used as bases for their rights.

He said businesses should not discriminate against but instead treat all workers equally regardless of their classification.

“Whatever is the classification of workers, they are human beings. Their rights are not diminished when they have a different classification,” Tagle said.

Employers should not classify workers and instead should treat them all equally, he said.

Tagle called on labor leaders and their organizations to be sincere for the good of all workers. He also proposed the elevation of the protection of workers’ tenure to international agencies.

Contrary to some news reports, the labor leaders were not disappointed with the results of their meeting with the President, Baldoz told reporters at a job fair in SM Mall of Asia.

Among the proposals being considered by the government is a suggestion for more tax exemptions for minimum wage earners.

Aquino, however, called for higher contributions to the Social Security System (SSS) for workers, drawing a sharp response from labor representatives who called the idea “adding insult to injury.”

Bayan Muna Rep. Neri Colmenares criticized Aquino for rejecting the workers’ demands for wage increases, security of tenure and tax exemptions, which showed, he said, that the President had “no heart for the working class.”

In proposing higher SSS premiums, Aquino noted that the contribution rate had been increased only twice since 1980, while pensions had been raised 20 times.

Aquino wanted the current contribution rate to be increased to 11 percent from 10.4 percent, which would translate to P60 a month for workers earning P10,000.

The President said the increase in contributions would allow SSS members to enjoy higher benefits.

But Colmenares said increasing the SSS contribution would put an additional burden on workers, who already endured a lot of other deductions from their wages.

He said Bayan Muna’s own study showed that the SSS had enough funds to give members higher benefits without increasing the monthly premiums.

According to Colmenares, the SSS has assets worth P343.67 billion as of March 2012, while its annual investment income amounts to P21 billion to P23 billion a year.

The SSS also has collectibles worth P8.5 billion in unremitted premiums as of December 2010, he said.

The SSS also has collectibles amounting to about P14.6 billion from employers who failed to avail themselves of the agency’s amnesty program, Colmenares said.

But the SSS, he added, has yet to file charges against 170,000 delinquent employers who failed to remit their employees’ contributions.

More than 11,500 workers marched in Cebu, Iloilo, Aklan and Capiz.

Speakers took turns decrying the labor policies of Aquino and reiterating their demand for a P125 across-the-board increase in the minimum wage.

Despite the intensity of the workers’ demands, there were no reports of violence.

In Metro Manila, terminated workers of Digital Telecommunications Philippines (Digitel) and their supporters marched across the business center in Makati City to protest what they called “unfair labor practices” at the telco.

Digitel, one of the biggest telecommunications companies in the country, is now a subsidiary of the Philippine Long Distance Telephone Co. (PLDT), which is led by businessman Manny V. Pangilinan.

The workers have been picketing PLDT headquarters on Makati Avenue for 21 days since the management’s refusal to implement a Supreme Court decision ordering the company to start talks for a collective bargaining agreement with the workers and reinstate 13 employees it had dismissed in 2005 with full compensation.

There were no untoward incidents. Except for about 30 protesters who sought shelter at first-aid stations, the marches were peaceful, according to Manila Police Director Senior Supt. Robert Po.

Protesters burned 10-foot-tall effigies of President Aquino and US President Barack Obama to symbolize the supposed state of the nation under the Aquino administration.

Welcome but no talk

Politicians running for office in the May 13 elections joined the pleas for worker benefits. They were welcome at labor rallies, but were not allowed to speak.

But United Nationalist Alliance (UNA) senatorial candidate Jack Enrile said the government should keep the door open to an increase in the minimum wage to show that it is truly sincere in saying it protects the rights and welfare of the country’s workers.

Enrile said labor groups should continue pressing for reforms and better working and living conditions as the economy continued to improve.

Another UNA senatorial candidate, Richard Gordon, suggested that the government tap the potential of tourism to create new jobs.

Gordon said the government could harness the potential of tourism as a source of jobs if it would allow the full implementation of the Tourism Act of 2009.

Gordon, a former secretary of tourism, said the tourism development law, which he himself authored, had yet to be fully enforced.

He alleged that the implementation of the law has been hampered by concerns raised by the Bureau of Internal Revenue and the Bureau of Customs regarding revenue leakage. He noted that the finance department and the BIR have historically opposed the granting of fiscal incentives as this could lead to revenue loss.

Read Next
Talk of name recall: Vote for ‘Tarzan,’ ‘Suka,’ ‘Eleccion,’ etc.
EDITORS' PICK
Senate bill seeks to penalize employers requiring employees to work during rest hours
Acer starts the year off strong with the Aspire Vero National Geographic Edition
Gear up and get ready to play with Yamaha Mio Gear
Marcos-era elections: Not what his son signed up for
If elected VP, Sara Duterte will push for mandatory military service for all Filipinos
Over 3 Million worth of prizes to be won at Smart Padala’s SENDali Manalo Promo!
MOST READ
Jose Manalo’s son Benj pays tribute to late mother: ‘You’re a testimony of God’s love’
‘Sampal sa gobyerno:’ Drilon wants unvaxxed PAO chief barred from working
Ferdinand Marcos’ elections: Not the same as the one his son is now taking part in
Vice mayor slams Vico Sotto for turning Pasig into a ‘puro palabas’ city
Don't miss out on the latest news and information.