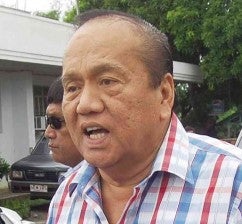 The fight between grandfather and grandson for governor of Camarines Sur has left many residents in disbelief and suspicious of the motive behind it.

“We really do not know. But given the fact that there is nothing more important but power to the Villafuertes, who will say this is not moro-moro (charade)?” says lawyer Henry Briguera, a former broadcaster and columnist of the weekly Bicol Mail.

“If it is, they are fooling the people,” says Briguera, a voter in Sagñay town.

For the first time in the history of the province, Luis R. Villafuerte (LRV), a well-honed politician, and his neophyte grandson, Miguel Luis “Migz” Villafuerte, are competing against each other and three others to win the hearts of more than 900,000 voters.

Migz, 24, is the eldest son of outgoing Gov. Luis Raymund “LRay” Villafuerte, and is said to have graduated in a correspondence school with no experience in public service. In his public statements, he said he wanted to continue the legacy of his father.

But Luis, 77, a lawyer and finance specialist who has been in the national and local political scene since the 1970s, has questioned the competency of his grandson who, he says, is too young and inexperienced to run for public office.

With less than two weeks to actual voting, Migz, who is running against three others, has remained mysterious and inaccessible to media despite talks and questions about his credentials.

He is virtually unknown to voters in terms of background, except for television ads and a Facebook account that says he graduated with a political science degree from the University of San Diego in California and carries a replica of his diploma to prove it.

A greenhorn in politics, Migz is listed as LRay Jr.—Migz Villafuerte in the Commission on Elections’ official list of candidates, preceding his grandfather, Luis, who has questioned his use of the name LRay Jr. He is the eldest son of LRay, who has been estranged to his father Luis since 2007.

Migz was introduced to the public through wakeboarding competitions at the CamSur Watersports Complex, an artificial water sports facility established in 2005 inside the 118-hectare Capitol Complex in Pili.

In May 2011, he made a stir in show business when he was reported to be courting singer-actress Sarah Geronimo by sending her a bouquet of flowers during the premier showing of the film “Catch Me, I’m in Love.” The supposed courtship just faded away from memory. 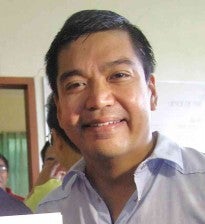 Migz’s Facebook account describes him as founder and chief executive officer of JungleFace, and founder and president of Repub1ic Inc. JungleFace and Republic are business enterprises owned by the family of LRay. He took his prep and grade schools at De La Salle Zobel and high school at International School of Manila.

He has declared publicly that he will work for the improvement of education, tourism and employment “to build the foundation of the youth, being the hope of the nation.”

While professing his love to his lolo, Migz has said the time had come for the new generation of Villafuertes to lead the province to progress, and that he is running for governor to continue the legacy of his father LRay.

He intends to win over 60 percent of the young voters in Camarines Sur. The province has almost a million voters at 979,387 across 1,063 barangay units.

Luis has questioned the competency of his grandson who, he describes, as potot (too young) and inexperienced to run for public office.

He says his campaign machinery this year “is stronger than years before because all big political leaders are now with him.”

Luis dismisses as false the speculation that one of them (Luis or Migz) would withdraw in the last hour, but declares that both Migz and LRay will lose in the elections. LRay is challenging Dato Arroyo in the second district.

The Inquirer tried to reach LRay for his views about how the family feud will affect its bid to power. He did not respond but instead sent a text message saying there were more important subjects than that.

As Luis wrestles for the gubernatorial position with his grandson, former Solicitor General Anselmo Joel Cadiz and a certain Joel Pelo, his wife, Nelly, is also taking on a race  in the third 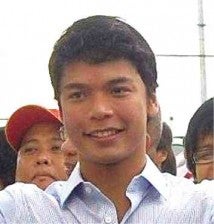 Even if four Villafuertes are running in this elections, Luis says it is not correct to say that his family is aiming for dynastic rule since one of them—particularly in the gubernatorial race—will be defeated.

“Where is the dynasty there?” he asks. The clan has been in power in Camarines Sur since the prewar years.

Briguera’s suspicion that the father-son feud is superficial is shared by two voters from San Fernando town.

“Blood is thicker than water,” say Gracita and Maket, restaurant workers in Naga City who both declined to give their surnames because they are working for a boss identified with Dato Arroyo.

After all, they said, “family interest reigns supreme.”