Amanda Knox says what happened to her was surreal 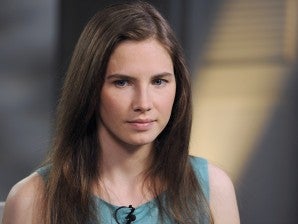 This April 9, 2013 photo released by ABC shows Amanda Knox during the taping of an interview with ABC News’ Diane Sawyer in New York. AP

SEATTLE— The U.S. woman whose acquittal in the murder of a British student has been overturned in Italy says in an interview that what happened to her was “surreal but it could have happened to anyone.”

Amanda Knox told ABC News’ Diane Sawyer in an interview airing Tuesday night that “I want the truth to come out. I’d like to be reconsidered as a person.”

In March, Italy’s highest criminal court overturned Knox’s acquittal in the 2007 murder of Meredith Kercher and ordered a new trial for Knox. Italian law cannot compel the 25-year-old to return for the new legal proceeding.

Knox told Sawyer the court’s decision was “incredibly painful” and she felt as if she had to crawl through another field of barbed wire after reaching what she thought was the end.

She said she was aware of being labeled a seductress, a she-devil and other names in the media, but she said, “They’re wrong.”

Italian prosecutors have said Knox, who was an exchange student studying in Perugia, Italy, and her then-boyfriend Raffaele Sollecito killed Kercher in a drug-fueled sex assault involving a third man from the Ivory Coast. Kercher died of a stab wound to the neck.

Prosecutors maintained that the murder weapon was a large knife taken from Sollecito’s house. Prosecutors said the knife matched the wounds on Kercher’s body and had traces of Kercher’s DNA on the blade and Knox’s DNA on the handle.

However, Knox’s defenders said she was innocent and was forced to say things she didn’t mean during a 14-hour police interrogation. And they said Italian police contaminated the crime scene, producing flawed DNA evidence.

Rudy Guede from the Ivory Coast is serving a 16-year sentence for Kercher’s slaying. A new trial also has been ordered for Sollecito.

What happened that night remains a mystery.

“I was in the courtroom when they were calling me a devil,” Knox told Sawyer in interview excerpts posted online. “It’s one thing to be called certain things in the media, and it’s another thing to be sitting in a courtroom fighting for your life while people are calling you a devil.

“For all intents and purposes I was a murderer, whether I was or not. I had to live with the idea that that would be my life,” she said during the interview.

Since returning to the U.S. in 2011, Knox has largely avoided the public spotlight while studying at the University of Washington.

Her memoir, “Waiting to Be Heard,” was released Tuesday.

Read Next
QC court acquits ex-People’s Journal reporter of libel
EDITORS' PICK
DOH warns vs improper use of antigen test kits
Experience Terreno South’s refreshing take on thriving lifestyles
No to ‘negativity’: Marcos Jr. to only do ‘unbiased’ interviews
Start the year right with sustainable oral hygiene with SPLAT’s eco-friendly natural toothpastes
BBC StoryWorks and TECNO make short film about inclusive mobile camera innovations bringing people together
DOH: More beds needed than oxygen, ventilators
MOST READ
No to ‘negativity’: Marcos Jr. to only do ‘unbiased’ interviews
‘Not corrupt’: Lacson says he admires Noynoy Aquino of all PH presidents
Comelec: No reason to cancel BBM’s COC
If she weren’t running for President, Robredo says she would vote for Pacquiao
Don't miss out on the latest news and information.