MANILA, Philippines – Aquilino “Koko” Pimentel III has been proclaimed the 12th senator of the 15th Congress, 990AM reported. 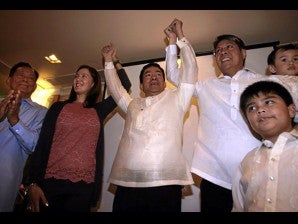 Pimentel, a lawyer by profession, assumed the position after then Senator Juan Miguel Zubiri resigned over allegations of cheating during the 2007 elections.

The Senate Electoral Tribunal (SET) made the proclamation at the Sofitel Hotel in Manila Thursday.

Pimentel claimed that Zubiri had cheated him in areas in Mindanao where he was supposed to have won and subsequently filed an election protest. He has since withdrawn this after Zubiri resigned.

An SET tally showed that Pimentel won over Zubiri by 258, 166 votes.

Witnessing the proclamation was his family, led by his father, the former Senator Aquilino Pimentel Jr.