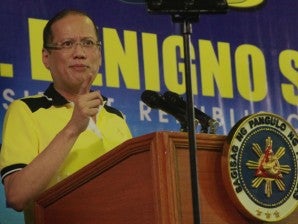 MANILA, Philippines—The Senate race will likely end up 9-3, not 12-0, in favor of Team PNoy.

President Benigno Aquino III himself hinted at this possible electoral outcome, telling reporters on Tuesday that based on the latest surveys on senatorial preferences of voters, Team PNoy may have cemented its hold on 9 of the top 12 slots in the Senate race.

But the President said he was not giving up hope yet that his handpicked senatorial candidates would win all 12 senate slots at stake in the May 13 election.

In an interview after a dialogue with labor leaders in Malacañang, Mr. Aquino said he was working even harder to campaign for former senators Ramon Magsaysay Jr. and Ana Consuelo Madrigal, and former party-list representative Risa Hontiveros.

Survey after survey, the three have failed to break into the top 12 in the polls.

“The surveys seem to be consistent from the start —9-3. [It] hasn’t changed. So you will have a few movements, a few percentage points here and there,” the President said, adding, “We are still working for the entire 12.”

UNA’s JV Ejercito, Nancy Binay and Juan Miguel Zubiri landed on the tailend of the race, securing the 8th, 9th and 12th spots.

Although his daughter, Nancy, soared—for the first time in the Senate race—to the 3rd spot in the SWS survey, Vice President Jejomar Binay questioned his plunge in approval rating in a survey conducted by the same polling firm from March 19 to 22.

The two highest elected leaders, however, were still in the “very good” category, according to SWS.

In the interview at the Palace, Mr. Aquino was asked if he was still confident that Hontiveros, Magsaysay and Madrigal would make it to the winning circle come May 13. He replied: “We will do everything we can to press for the candidacy of our candidates.”

Asked about his “final marching orders” to ensure a 12-0 sweep of the Senate race, he said: “I tell all of the candidates: nobody should relax at this point in time. If it’s possible to even increase your efforts, please do so. I think I am leading also by example. We believe we are espousing a certain ideology. Regardless of my physical condition, I will endeavor to maximize delivering the message to our people.”