Malaysia braces for its closest election ever | Inquirer News

Malaysia braces for its closest election ever 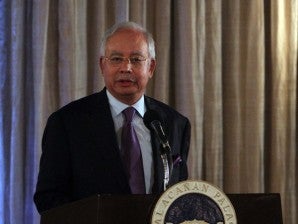 KUALA LUMPUR – When Malaysian voters cast ballots in Sunday’s general election it will be the first time in the country’s history that they do so without knowing the eventual winner.

The ruling coalition headed by the United Malays National Organisation (UMNO) is among the world’s longest-serving governments, unbeaten since independence in 1957 thanks to decades of economic growth and authoritarian rule.

But the rising Pakatan Rakyat (People’s Pact) opposition alliance has tapped into UMNO fatigue with promises to end authoritarianism and corruption, and many observers say the vote is hard to predict.

“It’s going to be really close. I think (the ruling coalition) will win but with a reduced majority. But there is a real chance Pakatan might do it,” said Wan Saiful Wan Jan, head of the Malaysian think tank IDEAS.

Controlled by the Muslim ethnic Malays who make up 55 percent of Malaysia’s population, UMNO’s Barisan Nasional (National Front) ruling coalition has vastly greater resources and a chokehold on traditional media.

Premier Najib Razak can tout steady economic growth of 5.6 percent in 2012 and a torrent of populist handouts as he seeks his first mandate — he was installed by UMNO when it pushed out his predecessor over a 2008 polls setback.

But the multi-racial opposition led by charismatic former deputy premier Anwar Ibrahim is no longer a pushover after seizing a third of parliament in 2008, tripling its seats and shocking the country with its best showing ever.

With Anwar vowing a “Malaysian Spring”, the three-party opposition can claim the momentum and point to success governing four states won in 2008.

It pledges a national shake-up including reform of policies favouring Malays in business and education that irk the sizeable Chinese and Indian minorities and are criticised as a drag on national competitiveness.

Sensing the mood, Najib has made cautious reforms including replacing some repressive laws. But despite solid personal approval ratings, surveys show his government’s image has not improved.

“The reality is that UMNO has not reformed in the key areas needed — corruption, arrogance of power, racial inclusion and a fundamental vision for where to take the country,” said Bridget Welsh, a Malaysia politics expert at Singapore Management University.

The Barisan coalition has 135 of parliament’s 222 seats to Pakatan’s 75, and a reduced Barisan majority is widely forecast. But dozens of seats are considered too close to call.

The stakes are high for both sides.

A Barisan loss threatens a Malay elite accustomed to political dominance and its rich business perks.

Najib, meanwhile, is under pressure to improve on 2008’s showing and could face a career-ending UMNO leadership challenge if he fails, party insiders say.

If the opposition falls short it must confront life after Anwar, who says he would step aside as its figurehead in that event.

Anwar was once UMNO’s heir-apparent but was ousted in 1998 and jailed for six years on sex charges after a power struggle with his boss, then-premier Mahathir Mohamad.

The episode altered Malaysian politics by giving the previously ineffectual opposition a formidable campaigner with top government experience. But Pakatan has no one else approaching his stature and pan-racial star power.

“This election will decide Malaysia’s future,” Najib said in emailed comments to AFP, determining who will “set the direction for Malaysia through the 2020s and beyond”.

One wild card is a new generation of voters — 2.5 million of the 13.3 million registered to vote are under age 30 — raised on pro-opposition views that have exploded on Malaysia’s uncensored Internet in recent years.

An electoral reform group that has staged huge rallies in the past two years warns it will be Malaysia’s “dirtiest” election, alleging widespread fraud by Barisan in voter rolls, which the government denies.

Tempers have flared during campaigning, with police reporting hundreds of cases of election violence.

Economists warn, meanwhile, of long-term fiscal damage from the promises each side has made under their similarly populist platforms.