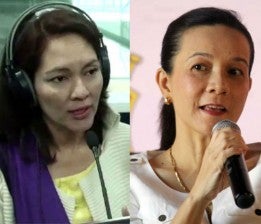 MANILA, Philippines—Two senatorial candidates of the administration coalition on Monday urged Malacañang to finally take a hard look at the precarious position of contractual workers who jump from one job to another once their agreement with employers expires after three to five months.

After labor leaders air their concerns on a host of labor issues at a breakfast meeting in Malacañang on Tuesday, Aquino is expected to outline the nonwage benefits for the country’s workforce, presidential spokesman Edwin Lacierda said.

Lacierda said the dialogue would serve as a venue for labor organizations to raise their concerns and hear directly from the President. But he ruled out any announcement of a wage increase.

“Truth to tell, I do not see companies shutting down left and right if their employees are given a reasonable wage increase. On the other hand, leaving our workers with no choice but to stage protests would be the worst possible recourse since it would affect our growing economy. And this would mean a double whammy for us: Production systems will be halted and wage earners and their families will go hungry,” Poe said.

“Security of tenure has been a longstanding issue of workers. Maybe it’s time the President considered a remedy to this situation,” said Hontiveros.

Poe said contractualization of labor, which gives an employee a working agreement of less than six months, was one of the “rampant” antilabor policies still plaguing the sector.

Many prominent businessmen unscrupulously exercise this setup to avoid a legal provision that requires an employer to promote a worker to regular status—with all the monetary and nonmonetary benefits—after working for six straight months.

Poe also warned that the Department of Labor and Employment’s continued refusal to pay attention to the demand for a wage adjustment could result in “mass leaves, sit-down strikes, factory walkouts and work stoppages,” particularly in the manufacturing and services sectors.

Lacierda said the petition for a wage increase had been filed with the DOLE and would be reviewed by the regional wage boards on May 17.

He said the public should wait for the President’s announcement on the nonwage benefits.

Officials of the moderate Trade Union Congress of the Philippines (TUCP) vowed to promote the welfare of jobless workers as well as employment and jobs creation, social protection, right to self-organization and collective bargaining, wage increases, tripartism and social dialogue, and labor dispute settlement.

The TUCP said the 6.6-percent economic growth rate in 2012, the highest in Southeast Asia, had not translated into opportunities for employment.

On top of this, the poverty incidence had remained unchanged in the past six years, proof that the benefits of economic growth had not trickled down to the poor.

Dialogue all for show
“This dialogue is just ceremonial, all for show just like previous Labor Day dialogues sponsored by Malacañang,” Anakpawis party-list Rep. Rafael Mariano said in a statement. “Workers ought to assert the ideals and militant tradition of Labor Day rather than listen to Aquino’s empty promises.”

Of the nonwage benefits, Mariano said: “While millions of Filipino workers and their families are bearing the brunt of the increasing cost of living brought about by endless price increases and hikes in utilities and services, the Aquino administration only offers trinkets and crumbs through nonwage benefits.”

Citing research conducted by the Ecumenical Institute for Labor Education and Research, he said a family spent an average of P10,850 monthly for food and nonfood requirements, such as rent, electricity, water, transportation, toiletries and mobile phone load.

“The government can keep workers’ wages down while protecting employers and their profit margins. Where is justice under this administration?” he said.

To be relevant, the government should institute policy reforms that would reverse “antiworker” policies including wage freezes, labor contractualization, labor migration, price hikes, among other things, Mariano said.