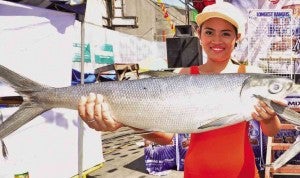 DAGUPAN CITY—For gobbling up two grilled “bangus” (milkfish) in a little over a minute, Edgar Grado erased last year’s bangus-eating contest record during the Bangus Rodeo, an event of the Bangus Festival here.

“They are faster now. I think they prepared for this event,” said Emma Molina, city agriculturist and event vice chair.

Now on its 12th year, the Bangus Rodeo has become one of the most-awaited events of the festival, attracting bangus growers and fisher folk. A winner receives P3,000, while the second and third placers get P2,000 and P1,000.

“They consider winning in this event one of their crowning glories in the aquaculture industry,” said Roberto Llamas, event chair.

Cris Alcaparas of Barangay Lucao was this year’s fastest bangus classifier, sorting out some 280 pieces of bangus according to sizes in 2:42 seconds.

This was a little slower than Melecio Melendez’s time last year of 2:23. Melendez placed second this year, clocking 3:29.

The fastest bangus deboner was Mark Joseph de Vera of Barangay Bonuan Binloc. He deboned two pieces of bangus in 1:43.

Oversized bangus were also pitted against each other, according to weight and length.

The heaviest, which tipped the scales at 12.25 kilograms and won P15,000 as top prize, was raised in the fishpond of Eduardo Fernandez in Barangay Pantal. This is lighter than Rene Landingin’s winning entry last year, which weighed 12.95 kg.

A bangus can grow bigger over the years in a pond, said Lino Fernandez, one of the leading bangus growers. These are usually the few fish left in the pond during harvests, he said.

“If you continue to just leave them there and feed them, they grow bigger,” he said.

He said he used to have several overgrown fish in his pond but these all escaped to the sea when his pond overflowed during a flood. He used to sell them to a bangus breeding facility in Sual town.

“The big bangus are edible, often cooked as ‘relleno’ and served during fiestas or special occasions,” Fernandez said. “It’s just that its flesh is quite rough because of its age and size. A young bangus is softer and juicier.”

The longest bangus was 82 centimeters long and was raised by Renato Español of Barangay Pantal. It was more than a centimeter shorter than last year’s winner, which was 83.5 cm long.

Highlighting the activity was the bangus “beauty contest.” The “prettiest” bangus was raised in the pond of Romy Bautista of Barangay Salapingao. It had clear eyes, shiny scales, a round belly, smaller head and uneven tail.