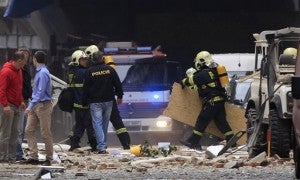 Policemen and firefighters inspect the scene of an explosion in downtown Prague, Czech Republic, Monday, April 29, 2013. Police said a powerful explosion has damaged a building in the center of the Czech capital and they believe some people are buried in the rubble. (AP Photo/Petr David Josek)

PRAGUE – A powerful gas blast ripped through a block of flats in Prague’s historic center on Monday, injuring about 20 people, rescuers said, adding that some people may be buried in the rubble of the damaged building.

“We have treated up to 20 people, and we are trying to find out if there are people buried in the rubble,” Prague emergency service spokeswoman Jirina Ernestova told AFP.

An AFP photographer at the scene saw dozens of people with cuts, likely sustained by shattered glass from windows along the debris-covered street.

“A gas blast seems to be the most likely cause. The explosion was rather massive and damaged windows in several streets,” Hulan said.

Czech media quoted witnesses as saying they could smell gas in the street.