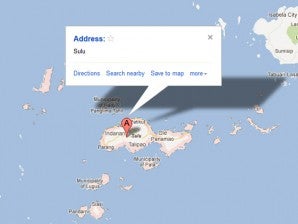 MANILA, Philippines – The province of Sulu has been added to the list of areas of concern by the Commission on Elections (Comelec), chairman Sixto Brillantes Jr. told reporters Monday.

“Sulu has been added to the areas of concern, before it was not included in the 15 [areas initially declared],” Brillantes told reporters.

He said he was shocked when he found out it was not included in the initial 15 areas the Comelec, as well as the Philippine National Police (PNP) and Armed Forces of the Philippines (AFP), are closely monitoring.

Area of concern means that the locality has a history of election-related violence, Brillantes said.

“If there are incidents that would aggravate this situation, then we move it up to immediate concern, we can add police and military personnel,” he said.

After immediate concern is grave concern, which means that there was further increase in the election violence. When it could still not be controlled, the area would be declared under Comelec control, Brillantes said.

He said that no area has been declared yet to be under grave concern. “None yet … we don’t expect and we hope that they will not reach that stage anymore.”

Despite the recent incidents of ambushes in the country that involved local government officials, Brillantes said that there was a large drop in the number of reported incidents of violence compared to the 2010 elections.

“Two weeks before the elections, the reported incidents [showed] 40 percent less than the 2010, meaning it’s not too intense,” Brillantes told reporters citing the latest data given to them by PNP and the AFP.

The previous week, 13 people were killed after the group of Abdulmalik Manarampan, Municipal mayor of Nunungan, Lanao del Norte, was ambushed by still unidentified gunmen.

Last April 20, the group of Gingoog City Mayor Ruth de Lara Guingona in Misamis Oriental was also ambushed by the New People’s Army (NPA) rebels, the armed wing of the Communist Party of the Philippines (CPP).

A local barangay (village) official of Bacoor City, Cavite, Cathy Palabrica, was wounded while her two companions were killed after motorcycle riding-in-tandem suspects opened fire on her group as they were heading to a campaign venue.

Brillantes said that Bacoor and Nunungan were not yet declared as areas of immediate concern and that the incidents are still being investigated by police.