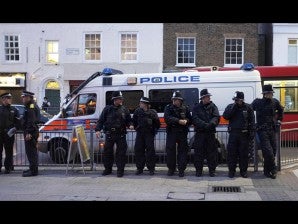 ON GUARD. Police officers stand on Eltham High Street in London, Wednesday, Aug. 10, 2011. A large group of local men gathered in the area on Wednesday to deter looters and a large number of police officers was also present to prevent any vigilante actions. AP Photo/Matt Dunham

LONDON — Thousands of extra police officers flooded the streets of London on Wednesday to deter rioters, and Prime Minister David Cameron warned that the government will take any necessary action to restore order and confidence to Britain’s streets.

Even as Cameron promised not to let a “culture of fear” take hold, tensions flared in Birmingham, where a murder probe was opened after three men were killed in a hit-and-run drive as they took to the streets to defend shops from looting.

“We needed a fightback and a fightback is under way,” Cameron said in a somber televised statement outside his Downing Street office after a meeting of the nation’s crisis committee. As if to indicate his resolve, he underlined “nothing is off the table” — including water cannon, commonly used in Northern Ireland but never deployed in Britain.

The number of arrests in London alone climbed to 805, with courts staffing around the clock to process alleged looters, vandals and thieves — including one as young as 11. Cameron has recalled Parliament from its summer recess for an emergency debate on the riots Thursday.

An eerie calm prevailed over most of London as night fell Wednesday, with a highly-visible police presence throughout the city. Metropolitan Police said objects had been thrown at officers in south London’s Eltham neighborhood but that the incident had been “dealt with” and a group was dispersed.

Outside the capital, in England’s second largest city of Birmingham, police launched a murder investigation into the deaths of three men hit by a car. Residents said the dead men, aged 21 to 31, were members of Birmingham’s South Asian communities who had been patrolling their neighborhood to keep it safe from looters.

“They lost their lives for other people, doing the job of the police,” said witness Mohammed Shakiel, 34. “They weren’t standing outside a mosque, a temple, a synagogue or a church — they were standing outside shops where everybody goes. They were protecting the community.”

Tariq Jahan, whose 21-year-old son Haroon was killed, stood in a Birmingham street and pleaded with the South Asian community not to seek revenge against the car’s occupants, reported to be black.

“Today we stand here to plead with all the youth to remain calm, for our community to stand united,” he said. “This is not a race issue. The family has received messages of sympathy and support from all parts of the community — all races, all faiths and backgrounds.”

He remonstrated with angry young men, urging them to “grow up” and go home.

Chris Sims, chief constable of West Midlands Police, said a man had been arrested on suspicion of murder.

“The information we have at the moment would support the idea that the car was deliberately driven,” he said, appealing for calm. “My concern would be that that single incident doesn’t lead to a much wider level of distress and even violence between different communities.”

The violence has revived debate about the Conservative-led government’s austerity measures, which will slash 80 billion pounds ($130 billion) from public spending by 2015 to reduce the country’s swollen budget deficit.

Cameron’s government has slashed police budgets as part of the cuts. A report last month said the cuts will mean 16,000 fewer police officers by 2015.

London mayor Boris Johnson — like Cameron, a Conservative — broke with the government to say such cuts are wrong.

“That case was always pretty frail and it has been substantially weakened,” he told BBC radio. “This is not a time to think about making substantial cuts in police numbers.”

Scenes of ransacked stores, torched cars and blackened buildings have frightened and outraged Britons just a year before their country is to host next summer’s Olympic Games, bringing demands for a tougher response from law enforcement. Police across the country have made almost 1,200 arrests — including more than 800 in London — since the violence broke out in the capital on Saturday.

Armored vehicles and convoys of police vans backed up some 16,000 officers on duty — almost triple the number who were out Monday night. The show of force seems to have worked — there were no reports of major trouble in London on Tuesday night, although there were scores of arrests.

“What happened in London last night was, when community leaders and the police came together, there were significant arrests,” said police deputy assistant chief constable Stephen Kavanagh. “Some looters were taken away before they got into doing anything, but it was that joint action that made the difference.”

Britain’s soccer authorities were talking with police to see whether this weekend’s season-opening matches of the Premier League could still go ahead in London. A Wednesday match between England and the Netherlands at London’s Wembley stadium was canceled.

Britain’s riots began Saturday when an initially peaceful protest over a police shooting in London’s Tottenham neighborhood turned violent. That clash has morphed into a general lawlessness in London and several other cities that police have struggled to halt.

While the rioters have run off with goods every teen wants — new sneakers, bikes, electronics and leather goods — they also have torched stores apparently just to see something burn. They were left virtually unchallenged in several neighborhoods, and when police did arrive they often were able to flee quickly and regroup.

Some residents stood guard to protect their neighborhoods — Sikhs protected their temple in Southall, west London, and some 1,000 far-right members reportedly took to the streets to deter rioters.