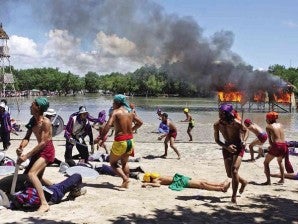 CEBU—Had it not been for Antonio  Pigafetta, the ethnographer, people would know very little about explorer Ferdinand Magellan and the world’s first successful circumnavigation.

Pigafetta’s keen observation of the events during Magellan’s historic voyage also enabled Filipinos to learn about the lives of their ancestors before the Spaniards formally staked their claim on the Philippine archipelago in 1565.

Although his testimony was meant for European readers and was not entirely free of bias and outright lies, it gave a detailed account of the Battle of Mactan, the first successful Filipino resistance against foreign invaders.

And in today’s celebration of the 492nd anniversary of the historic battle, it is timely to reexamine Pigafetta’s testimony of the event.

It can now be told that Lapu-Lapu, the valiant chieftain who led his men to fight the Spaniards on April 27, 1521, might have held a grudge against the abusive foreigners for burning Bulaia, a village beside Mactan, for unknown reasons.

But other chieftains, for personal reasons, had already allied themselves with the Spaniards. Humabon, the king of Cebu, befriended the Spaniards to save his skin, especially after hearing from some Asian traders that the same group of men had conquered India and Malacca.

Another chieftain was Zula, whom Pigafetta identified as another Mactan chieftain.

Zula’s plan to ally with Magellan was revealed on the night of April 26 when he sent his son to offer two goats to the Spaniards. He could also have  fulfilled his other promises had Lapu-Lapu recognized the king of Spain.

Magellan wanted to personally teach Lapu-Lapu a lesson. “We begged him not to go,” Pigafetta wrote, “but he, like a good shepherd, refused to abandon his flock.”

With 60 men and accompanied by Humabon and other chiefs in 20 to 30 balanghai, Magellan sailed for Mactan that midnight, reaching the island three hours before dawn. He waited until daybreak before sending another message to Lapu-Lapu to surrender to Spanish sovereignty. The native held his ground.

Forty-nine men disembarked and waged the war of conquest. Humabon volunteered to help, but Magellan declined. Only 11 stayed to guard the ships.

“When we reached land,” Pigafetta continued, “those men had formed three divisions to the number of 1,500 persons.”

While the number of men who left the ships may be accurate, the battle positions taken by Lapu-Lapu’s followers may have been a figment of Pigafetta’s imagination since they might not have employed any other fighting strategy than asdang or hand-to-hand combat and stealth.

Pigafetta may also have intentionally bloated the number of Lapu-Lapu’s men so the Spaniards would appear heroic before the eyes of his European audience. But having more than 1,000 fighters was simply untenable.

Magellan’s men used standard European arms, such as swords, crossbows and muskets, while the natives wielded bamboo lances and stakes, as well as stones and mud.

Even with their enemies’ puny arms, “we could scarcely defend ourselves,” Pigafetta wrote.

Finding the situation hopeless, Magellan sent some of his men to burn the natives’ huts  to terrify them.

When they saw their homes in flames, they became more furious. “So they charged down upon us that they shot the captain through the right leg with poisoned arrows.”

With the snake venom taking its toll on his body, Magellan ordered a retreat. However, the pullback was slow. Besides fending off the raining bamboo spears, wading through the muddy shores of Mactan on boots must have also aggravated the situation of the Spaniards.

This gave the defenders the chance to pounce on them. Specifically directing their attention at Magellan, whom the natives saw as the leader, “many turned upon him that they knocked his helmet … twice.”

Embellishing his story with a dose of chivalric fiction, Pigafetta continued: “But he (Magellan) always stood firmly like a good knight … . Thus did we fight for more than an hour, refusing to retire farther.”

Unbelievable as it may seem, the end finally came for Magellan. “An Indian hurled a bamboo spear on the captain’s face, but the latter immediately killed him with his lance.”

He wanted to draw out his sword but before he could do this, the natives “all hurled themselves upon him.” Wounded by a kampilan or cutlass, Magellan fell face down.