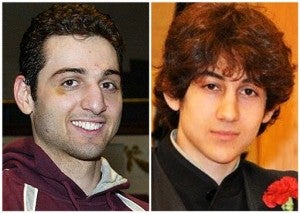 NEW YORK— The Boston Marathon bombers were headed for New York’s Times Square to blow up the rest of their explosives, authorities said Thursday, in what they portrayed as a chilling, spur-of-the-moment scheme that fell apart when the brothers realized the car they had hijacked was low on gas.

New York City Police Commissioner Raymond Kelly said Dzhokhar Tsarnaev told interrogators from his hospital bed that he and his older brother had decided spontaneously last Thursday night to drive to New York and launch an attack. In their stolen SUV they had five pipe bombs and a pressure-cooker explosive like the ones that blew up at the marathon, Kelly said.

“New York City was next on their list of targets,” Mayor Michael Bloomberg said.

The plan fell apart when the Tsarnaev brothers got into a shootout just outside Boston that left Tamerlan Tsarnaev dead, Kelly said.

“We don’t know if we would have been able to stop the terrorists had they arrived here from Boston,” New York City Mayor Michael Bloomberg said. “We’re just thankful that we didn’t have to find out that answer.”

Dzhokhar, 19, is charged with carrying out the Boston Marathon bombing that killed three people and wounded more than 260, and he could get the death penalty.

Christina DiIorio-Sterling, a spokeswoman for U.S. Attorney Carmen Ortiz in Boston, would not comment on whether authorities plan to add charges based on alleged plan to attack New York.

Investigators and lawmakers briefed by the FBI have said that the Tsarnaev brothers — ethnic Chechens from Russia who had lived in the U.S. for about a decade — were motivated by anger over the U.S. wars in Iraq and Afghanistan.

Based on the younger man’s interrogation and other evidence, authorities have said it appears so far that the Muslim brothers were radicalized via jihadi material on the Internet instead of by any direct contact with terrorist organizations, but they have said it is still an open question.

Dzhokhar was interrogated in his hospital room over a period of 16 hours without being read his constitutional rights. He immediately stopped talking after a magistrate judge and a representative from the U.S. Attorney’s office entered the room and advised him of his rights to keep quiet and seek a lawyer, according to a U.S. law enforcement official and others briefed on the interrogation.

Tamerlan had come under scrutiny from the FBI, the CIA and Russian intelligence well before the Boston attack. The CIA had added Tamerlan’s name to a terrorist database 18 months ago, after Russian intelligence flagged him as a possible Muslim radical, said officials close to the investigation who spoke on condition of anonymity because they were not authorized to discuss the case publicly.

That disclosure is certain to raise questions in Congress over whether the Obama administration missed an opportunity to thwart the Boston attack.

Dzhokhar Tsarnaev told authorities that his older brother only recently recruited him to be part of the attack, two U.S. officials said Wednesday.

Kelly, citing interrogations carried out by the task force investigating the Boston Marathon attack, said that days after the bombing, the Tsarnaev brothers “planned to travel to Manhattan to detonate their remaining explosives in Times Square.”

“They discussed this while driving around in a Mercedes SUV that they hijacked after they shot and killed the officer at MIT,” the police commissioner said. “That plan, however, fell apart when they realized that the vehicle they hijacked was low on gas and ordered the driver to stop at a nearby gas station.”

The driver escaped and called police, Kelly said. That set off the gunbattle and manhunt that ended a day later with Dzhokhar captured and 26-year-old Tamerlan dead.

A day earlier, Kelly said that Tsarnaev had talked about coming to New York “to party” after the attack and that there wasn’t evidence of a plot against the city. But Kelly said a later interview with the suspect turned up the information.

“He was a lot more lucid and gave more detail in the second interrogation,” Kelly said. He and the mayor were briefed on the information Wednesday night by the Joint Terrorism Task Force.

Kelly said there was no evidence New York was still a target. But in a show of force, police cruisers with blinking red lights were lined up in the middle of Times Square on Thursday afternoon, and uniformed officers stood shoulder to shoulder.

“Why are they standing like that? This is supposed to make me feel safer?” asked Elisabeth Bennecib, a tourist and legal consultant from Toulouse, France. “It makes me feel more anxious, like something bad is about to happen.”

Above the square, an electronic news ticker announced that the Boston Marathon suspects’ next target might have been Times Square.

In 2010, Times Square was targeted with a car bomb that never went off. Pakistani immigrant Faisal Shahzad had planted a bomb in an SUV, but street vendors noticed smoke and it was disabled. Shahzad was arrested as he tried to leave the country and was sentenced to life in prison.

Meanwhile, the Tsarnaev brothers’ father said Thursday that he is leaving Russia for the U.S. in the next day or two, but their mother said she was still thinking it over.

Anzor Tsarnaev has expressed a desire to go to the U.S. to find out what happened with his sons, defend his hospitalized son and, if possible, bring his older son’s body back to Russia for burial.

Their mother, Zubeidat Tsarnaeva, who was charged with shoplifting in the U.S. last summer, said she has been assured by lawyers that she would not be arrested, but was still deciding whether to go.

Read Next
Rain in Cagayan but hot weather still in most of Luzon–Pagasa
EDITORS' PICK
LIST: Healthcare personnel, gov’t officials who received jabs of Sinovac’s Covid-19 vaccine
3 things you need to know about your laundry detergent
PGH director is PH’s first Covid-19 vaccine recipient
JC Cares Foundation extends support to bloodletting program
FDA chief gets Sinovac Covid-19 shot
How serious is fatty liver?
MOST READ
Derek Ramsay reveals he and Ellen Adarna were set up on blind date, believes she’s the one
Drug war a ‘failure,’ Lacson says
QC-to-Rizal MRT line to start in 2023
Palace thumbs up Solar City
Don't miss out on the latest news and information.