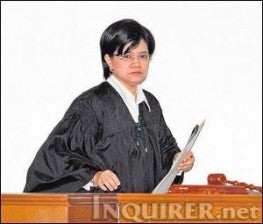 MANILA, Philippines—Saying that the law cannot require the impossible, a Quezon City judge has junked the request of five of the accused in the 2009 Maguindanao massacre case to be allowed to register to vote in the May elections.

The five had sought a writ of execution from Judge Jocelyn Solis-Reyes of QC Regional Trial Court Branch 221 directing the Commission on Elections (Comelec) to allow their registration as voters in the Autonomous Region in Muslim Mindanao (ARMM).

Ampatuan is a grandson of former Maguindanao Gov. Andal Ampatuan Sr., one of the principal accused in the massacre; Esmael was a driver of former Datu Unsay Mayor Andal Ampatuan Jr., another principal accused, while Tolentino, Kayansang and Esmail were members of a civilian volunteer organization. They are among the 195 accused in the Nov. 23, 2009, killing of 58 persons at Sitio (settlement) Masalay, Barangay (village) Salman in Ampatuan town, Maguindanao.

The five asked the court last year to require the Comelec to allow them to register to vote in the ARMM, based on the court’s July 17, 2012, order, which stated that they could register subject to Comelec regulations.