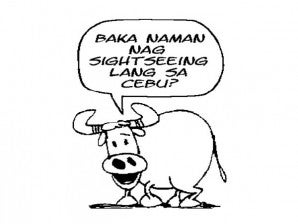 At least four whale sharks that have made the waters of Donsol, Sorsogon, their home and feeding grounds for years—long enough for locals to give them names—are nowhere to be found.

It’s the peak season for butanding (local name for the whale shark or Rhincodon typus) but guides are yet to spot Putol, Kuping, Nognog and Puti.

Putol has no caudal or tail fin. Kuping has a folded dorsal or back fin. Nognog looks dark. Puti has a whitish coloration due to spottiness.

Where did they go?

There are speculations that they might have gone to Oslob in Cebu, where whale sharks, having been hand-fed, are growing in number.

Radana, 36, a butanding interaction officer, or trained guide on whale shark interaction, said only the 4-meter Kulit had been seen roaming around this season, which kicked off in November last year.

Kulit is so-named for his elusiveness.

“It’s hard to interact with Kulit. [The whale shark] always swims the other way,” said Radana.

He could not tell whether the whale sharks would be back but he is praying the gentle giants would do so soon, or he would lose his only source of income.

A former food server and landscaper, Radana learned to be a whale shark interaction officer when news of whale sharks frequenting the waters of his hometown brought droves of tourists to the once sleepy and depressed municipality of Donsol.

A quick glance at the tourist arrival data of Donsol shows visits by people of various nationalities—from Americans, who top the list, to Ethiopians, Slovaks and Swedes. Domestic tourists, however, still surpassed foreigners.

But fewer whale sharks have been sighted in Donsol since 2011, which makes the future appear bleak for interaction officers.

Since 1998, Radana has been earning a daily net pay of P450, which he stands to lose once the whale sharks are gone.

Pedragosa said fewer sightings of whale sharks have resulted in a drop in tourist arrivals.

She said a 20-percent drop in the number of tourists coming to Donsol has been noted from January to April this year compared to the same period last year.

Pedragosa has attributed the decline to fewer sightings.

She said those who do not see whale sharks in Donsol would usually go to Oslob, which also offers whale shark interaction.

“But we are not threatened by whale shark interaction in Oslob because tourists still prefer the thrill of spotting and interacting with whale sharks in their natural state. Those in Oslob are hand-fed. Those who want to see butanding come to Donsol first. They only go to Oslob when they fail to see one here,” Pedragosa said.

She said it is not true that whale sharks in Donsol are going to Oslob.

“Studies show that the whale shark population in Donsol is different from that in Oslob, although there was one recorded incident when a whale shark from here was found there,” she said.

Radana blamed fewer sightings on climate change, which he said had brought rains even in summer, causing Donsol River to discharge murky water in the seas off Donsol, making it hard for them to spot whale sharks.

He also blamed rampant illegal fishing in the area. Activities traced to illegal fishers, according to him, might have disturbed the whale sharks, disrupting their feeding habits and causing them to leave.

Pedragosa said the tourism office would always warn tourists that sighting a whale shark was not guaranteed so they would not be frustrated.

“We offer various packages as alternatives, including island hopping and firefly watching at night,” she said.

She said the tourism boom due to the presence of whale sharks, indeed, has turned around Donsol.

“We were once a fifth-class [municipality]; now, we are a third-class town and we are actually applying to be classified as first class,” she said.

To be classified as first class, a town should be earning more than P55 million a year, according to the National Statistical Coordination Board.

Donsol, evidently, is a boomtown these days. The once forlorn municipal road is now a stretch of national road fringed by resorts and restaurants. Tricycle drivers and lodging houses are making a killing.

But all these could be gone if the whale sharks would not return or continue leaving the municipality’s troubled waters, as what could be happening these days.