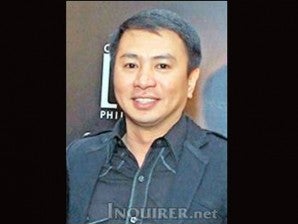 MANILA, Philippines – A disqualification case and an election complaint were filed in the Commission on Elections (Comelec) Wednesday against former Ilocos Sur representative Ronald Singson by his rival for the congressional seat in the May elections.

Lawyer Bertrand Baterina, who is running as congressman for the first district of Ilocos Sur against Singson, came to the Comelec to file a complaint against Singson for allegedly having a government police escort with electronic sirens locally known as “wang-wang.”

He said in his complaint that he and his companions were made to pull over to the side of the road “by two motorcycle uniformed policemen escorting the numbered vehicle convoy of Ronald Singson.”

“Said policemen were using ‘wang-wangs’ which I believe are allowed only for emergency vehicles. Moreover, the police mobile vehicles of the City of Vigan, which was filled with armed SWAT personnel, served as back-up vehicle,” Baterina said.

The alleged incident occurred on April 20 around 10 in the morning at the national highway of the Municipality of Bantay, Ilocos Sur, he said.

Singson should not have such escorts since he was not a government official and was also not entitled to such because he was a candidate.

“Singson is not a government official deserving of such grand mobilization of government resources,” Baterina said.

“Under pertinent Comelec rules, he is not even entitled to police uniformed security escorts being a congressional candidate or local candidate,” he said.

A disqualification case against Singson was also filed by Baterina saying he was previously convicted in Hong Kong for Drug Trafficking after he was caught at the airport with 6.67 grams of cocaine and two tablets of narcotics back in 2010.

Baterina said that “Singson is disqualified from running as a member of the House of Representatives … on the grounds that he was convicted by final judgement for a crime involving moral turpitude and the five-year period of disqualification after service of sentence has yet to expire.”

“An offense involving moral turpitude is defined as everything which is done contrary to justice, modesty, or good morals,” he said.

Singson’s five year disqualification from public office after serving his sentence will expire on 2017 making him ineligible to run in the upcoming 2013 elections, Baterina added.

The petition also asked that Comelec “issue an order on or shortly before the 13 May 2013 elections suspending [Singson’s] proclamation should he receive the higher number of votes,” in the event that the disqualification case was not yet resolved.